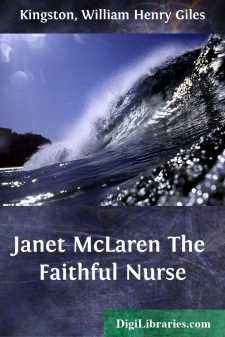 Donald Morrison, whose wife has lately been called away, dying in his Highland Manse, his Children left destitute, are taken care of by their old nurse.—She conveys them to a sea-side town, where she takes up her abode with them in a small attic, and labours for their maintenance, while she places the two boys, Donald and David, at school.—Her anxiety about the education of Margaret.

In his Highland manse, far away among the hills, where he had dwelt as pastor for many years over a wayward flock, Donald Morrison lay on a sick-bed. The same fever which had carried off his dear wife a few weeks before, had now stricken him down. He knew that he was dying. As far as he himself was concerned he was willing to yield up his spirit to his Maker; but what would become of his motherless children, his sweet young Margaret, and his two boys, Donald and David, their principles unformed, and ignorant of the evils of the world?

“Father in heaven protect them,” he ejaculated. “Give me faith to know that Thou wilt take care of them, teach them and guide them in their course through life.” But he felt that his mind was clouded, his spirit was cast down, the disease was making rapid progress. It was hard to think, hard even to pray, gloomy ideas, and doubts, and fears, such as assail even true Christians, crowded on his mind. He forgot—it was but for a time—the sincere faith which had animated him through life. The victory was not to be with the Evil One.

Soon there came hope, and joy, and confidence. “All will be well with the righteous, those who put on Christ’s righteousness,” he mentally exclaimed, and peace came back to his soul.

As he gazed out through the window he could see, down away on the wild hill side, his children at play, their young spirits too buoyant to be long suppressed by the recollection of their late bereavement, and unconscious that they were soon to be deprived of their remaining parent. His eye for a moment rested on the familiar landscape, the blue waters of the loch glittering in the sunshine, a bleak moorland sprinkled here and there with white-fleeced sheep stretching away on one side, and on the other a valley, down which flowed, with ceaseless murmurings, a rapid stream, a steep hill covered with gorse and heather, the summit crowned with a wood of dark pines rising beyond it. Just above the manse could be seen the kirk, which, with a few cottages, composed the village; while scattered far around were the huts in which the larger part of the pastor’s flock abode. As he gazed forth on the scene he prayed—he knew it might be for the last time—that his successor might be more honoured than he feared he had been in bringing home those wandering sheep to the true fold.

Once more his thoughts turned to his little ones. “Janet,” he whispered, as a woman of middle age, of spare form, with strongly marked features, betokening firmness and good sense, and clothed in the humblest style of attire, glided noiselessly into the room. “I feel that I am going.” He lifted up his pale and shrivelled hand, and pointed to his children. “What is to become of them, it is hard to leave them destitute, utterly destitute, not a friend in the world from whom they may claim assistance.”

“Dinna talk so, minister,” said the woman, approaching him, and placing his arm beneath the bed-clothes. “Ye yoursel have often told us to put faith in God, that He is the Father of the fatherless, and the husband of the widow....