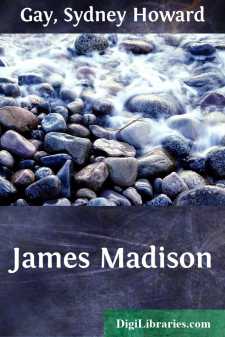 CHAPTER I THE VIRGINIA MADISONS

James Madison was born on March 16, 1751, at Port Conway, Virginia; he died at Montpellier, in that State, on June 28, 1836. Mr. John Quincy Adams, recalling, perhaps, the death of his own father and of Jefferson on the same Fourth of July, and that of Monroe on a subsequent anniversary of that day, may possibly have seen a generous propriety in finding some equally appropriate commemoration for the death of another Virginian President. For it was quite possible that Virginia might think him capable of an attempt to conceal, what to her mind would seem to be an obvious intention of Providence: that all the children of the "Mother of Presidents" should be no less distinguished in their deaths than in their lives—that the "other dynasty," which John Randolph was wont to talk about, should no longer pretend to an equality with them, not merely in this world, but in the manner of going out of it. At any rate, he notes the date of Madison's death, the twenty-eighth day of June, as "the anniversary of the day on which the ratification of the Convention of Virginia in 1788 had affixed the seal of James Madison as the father of the Constitution of the United States, when his earthly part sank without a struggle into the grave, and a spirit, bright as the seraphim that surround the throne of Omnipotence, ascended to the bosom of his God." There can be no doubt of the deep sincerity of this tribute, whatever question there may be of its grammatical construction and its rhetoric, and although the date is erroneous. The ratification of the Constitution of the United States by the Virginia Convention was on June 25, not on June 28. It is the misfortune of our time that we have no living great men held in such universal veneration that their dying on common days like common mortals seems quite impossible. Half a century ago, however, the propriety of such providential arrangements appears to have been recognized almost as one of the "institutions." It was the newspaper gossip of that time that a "distinguished physician" declared that he would have kept a fourth ex-President alive to die on a Fourth of July, had the illustrious sick man been under his treatment. The patient himself, had he been consulted, might, in that case, possibly have declined to have a fatal illness prolonged a week to gratify the public fondness for patriotic coincidence. But Mr. Adams's appropriation of another anniversary answered all the purpose, for that he made a mistake as to the date does not seem to have been discovered.

It was accidental that Port Conway was the birthplace of Madison. His maternal grandfather, whose name was Conway, had a plantation at that place, and young Mrs. Madison happened to be there on a visit to her mother when her first child, James, was born. In the stately—not to say stilted—biography of him by William C. Rives, the christened name of this lady is given as Eleanor. Mr. Rives may have thought it not in accordance with ancestral dignity that the mother of so distinguished a son should have been burdened with so commonplace and homely a name as Nelly. But we are afraid it is true that Nelly was her name. No other biographer than Mr. Rives, that we know of, calls her Eleanor. Even Madison himself permits "Nelly" to pass under his eyes and from his hands as his mother's name.

In 1833-34 there was some correspondence between him and Lyman C. Draper, the historian, which includes some notes upon the Madison genealogy. These, the ex-President writes, were "made out by a member of the family," and they may be considered, therefore, as having his sanction. The first record is, that "James Madison was the son of James Madison and Nelly Conway." On such authority Nelly, and not Eleanor, must be accepted as the mother's name. This, of course, is to be regretted from the Rives point of view; but perhaps the name had a less familiar sound a century and a half ago; and no doubt it was chosen by her parents without a thought that their daughter might go into history as the mother of a President, or that any higher fortune could befall her than to be the respectable head of a tobacco planter's family on the banks of the Rappahannock....