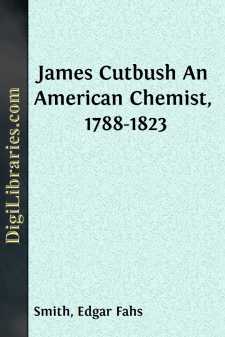 It is scarcely conceivable that anything pertaining to the development of chemical science in America would fail to interest its chemists. The response to the needs of the Nation in the last few years has shown how marvelously they wrought and the wonderful things which they brought to light. Yet in the long ago—in the days of which we only know by hearsay, and through desultory reading, there lived chemists with enthusiasm, knowledge and initiative, whose aim it was to have their chosen science contribute to the welfare of humanity. In the labors of such men as James Woodhouse, Robert Hare, Adam Seybert, Henry Seybert, John Redman Coxe, Joseph Cloud, Gerard Troost, and many others, the scientific spirit predominated, although with it went the purpose, more or less sharply defined, of making their acquirements useful. Particularly noticeable was this in the instance of Woodhouse.

The general consensus of opinion among present-day chemists is that chemistry should be helpful to all. It may and should be scientific, but its principles ought to be scientifically applied in every useful manner.

The reader, desirous of learning the aims and ambitions of the fathers of the science in our country, will profit by turning to the files of the Aurora, an old daily paper of Philadelphia, for the year 1808, and beginning about the middle of July will there encounter a most interesting series of articles on the applications of chemistry under the general heading

APPLICATION OF CHEMISTRY TO ARTS AND MANUFACTURES

There are fifteen separate papers. In considering the period—1808,—the age of the young Republic, and that the times were far from quiet; that unrest and uncertainty prevailed as to the fate of the Republic, it does not surprise that thought should have been given to means of protection; hence gunpowder was the very first product to engage the author of the series of articles. The proving and analysis of the powder are discussed at length. The methods appear very primitive in the light of present-day knowledge, but one must not forget the period. One hundred years hence the masterpieces of present-day chemists will perhaps provoke smiles upon the countenances of those who perchance read them. In this pioneer contribution on gunpowder analysis the charcoal of the powder is often called "oxid of carbon." In referring to the separation of potassium and sodium it is recommended to precipitate out the first in the form of tartrate. Naturally, nitre itself comes in for serious thought and the explosibility of the mixture of charcoal, nitre and sulphur arrests the author's attention, for he emphasizes the fact—

"that, independent of the formation of gases or airs, the agency of caloric, or matter of heat, generated in the process of combustion, considerably facilitates the strength of the powder, in consequence of producing the expansion of these airs."

Recently, under the pressure of a national necessity, which will not soon be forgotten, the problem of getting nitre—nitrates and kindred bodies—had the earnest attention of chemists. So, in the period before and after 1808, methods of forming nitre had grave consideration. For instance, this question, now amusing, was propounded—

"How much nitre could be manufactured from the refuse animal and vegetable matter of the City of Philadelphia in case of emergency? What quantity could be prepared by elixating or washing the rubbish of old buildings, the earth of stables, cellars, etc., and the soil of certain tracts of the United States?"

It is quite proper that mention should have also been made of the natural nitre beds, as well as of the artificial beds built up from slow experience. Reference is made that in France nitre was won from the lime and rubbish of old, ruinous buildings, and from the floors of stables and pigeon houses, while it is also recorded that during the American Revolution, the

"same means, by the hand of economy and industry, afforded quantities of this article in certain of the then Colonies, and"

that in the Southern portions it was obtained from the earthen floors of tobacco houses....