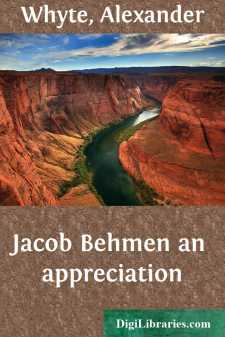 Jacob Behmen, the greatest of the mystics, and the father of German philosophy, was all his life nothing better than a working shoemaker.  He was born at Old Seidenberg, a village near Goerlitz in Silesia, in the year 1575, and he died at Goerlitz in the year 1624.  Jacob Behmen has no biography.  Jacob Behmen’s books are his best biography.  While working with his hands, Jacob Behmen’s whole life was spent in the deepest and the most original thought; in piercing visions of God and of nature; in prayer, in praise, and in love to God and man.  Of Jacob Behmen it may be said with the utmost truth and soberness that he lived and moved and had his being in God.  Jacob Behmen has no biography because his whole life was hid with Christ in God.

While we have nothing that can properly be called a biography of Jacob Behmen, we have ample amends made to us in those priceless morsels of autobiography that lie scattered so plentifully up and down all his books.  And nothing could be more charming than just those incidental and unstudied utterances of Behmen about himself.  Into the very depths of a passage of the profoundest speculation Behmen will all of a sudden throw a few verses of the most childlike and heart-winning confidences about his own mental history and his own spiritual experience. And thus it is that, without at all intending it, Behmen has left behind him a complete history of his great mind and his holy heart in those outbursts of diffidence, deprecation, explanation, and self-defence, of which his philosophical and theological, as well as his apologetic and experimental, books are all so full.  It were an immense service done to our best literature if some of Behmen’s students would go through all Behmen’s books, so as to make a complete collection and composition of the best of those autobiographic passages.  Such a book, if it were well done, would at once take rank with The Confessions of St. Augustine, The Divine Comedy of Dante, and the Grace Abounding of John Bunyan.  It would then be seen by all, what few, till then, will believe, that Jacob Behmen’s mind and heart and spiritual experience all combine to give him a foremost place among the most classical masters in that great field.

In the nineteenth chapter of the Aurora there occurs a very important passage of this autobiographic nature.  In that famous passage Behmen tells his readers that when his eyes first began to be opened, the sight of this world completely overwhelmed him.  Asaph’s experiences, so powerfully set before us in the seventy-third Psalm, will best convey, to those who do not know Behmen, what Behmen also passed through before he drew near to God.  Like that so thoughtful Psalmist, Behmen’s steps had well-nigh slipped when he saw the prosperity of the wicked, and when he saw how waters of a full cup were so often wrung out to the people of God.  The mystery of life, the sin and misery of life, cast Behmen into a deep and inconsolable melancholy.  No Scripture could comfort him.  His thoughts of God were such that he will not allow himself, even after they are long past, to put them down on paper.  In this terrible trouble he lifted up his heart to God, little knowing, as yet, what God was, or what his own heart was.  Only, he wrapped up his whole heart, and mind, and will, and desire in the love and the mercy of God: determined not to give over till God had heard him and had helped him.  ‘And then, when I had wholly hazarded my life upon what I was doing, my whole spirit seemed to me suddenly to break through the gates of hell, and to be taken up into the arms and the heart of God.  I can compare it to nothing else but the resurrection at the last day....