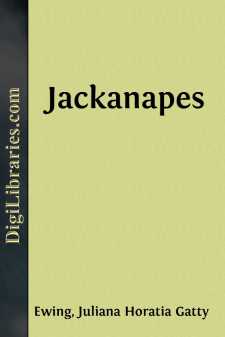 CHAPTER I. Last noon beheld them full of lusty life,Last eve in Beauty's circle proudly gay,The midnight brought the signal sound of strife,The morn the marshalling in arms—the dayBattle's magnificently stern array!The thunder clouds close o'er it, which when rentThe earth is covered thick with other clay,Which her own clay shall cover, heaped and pent,Rider and horse:—friend, foe,—in one red burial blent. Their praise is hymn'd by loftier harps than mine:Yet one would I select from that proud throng.—— to thee, to thousands, of whom eachAnd one as all a ghastly gap did makeIn his own kind and kindred, whom to teachForgetfulness were mercy for their sake;The Archangel's trump, not glory's, must awakeThose whom they thirst for.—Byron.

Two Donkeys and the Geese lived on the Green, and all other residents of any social standing lived in houses round it. The houses had no names. Everybody's address was, "The Green," but the Postman and the people of the place knew where each family lived. As to the rest of the world, what has one to do with the rest of the world, when he is safe at home on his own Goose Green? Moreover, if a stranger did come on any lawful business, he might ask his way at the shop.

Most of the inhabitants were long-lived, early deaths (like that of the little Miss Jessamine) being exceptional; and most of the old people were proud of their age, especially the sexton, who would be ninety-nine come Martinmas, and whose father remembered a man who had carried arrows, as a boy, for the battle of Flodden Field. The Grey Goose and the big Miss Jessamine were the only elderly persons who kept their ages secret. Indeed, Miss Jessamine never mentioned any one's age, or recalled the exact year in which anything had happened. She said that she had been taught that it was bad manners to do so "in a mixed assembly."

But she remembered the little Miss Jessamine, the Miss Jessamine with the "conspicuous" hair. Her aunt, the big Miss Jessamine, said it was her only fault. The hair was clean, was abundant, was glossy, but do what you would with it, it never looked like other people's. And at church, after Saturday night's wash, it shone like the best brass fender after a Spring cleaning. In short, it was conspicuous, which does not become a young woman—especially in church.

Those were worrying times altogether, and the Green was used for strange purposes. A political meeting was held on it with the village Cobbler in the chair, and a speaker who came by stage coach from the town, where they had wrecked the bakers' shops, and discussed the price of bread. He came a second time, by stage, but the people had heard something about him in the meanwhile, and they did not keep him on the Green. They took him to the pond and tried to make him swim, which he could not do, and the whole affair was very disturbing to all quiet and peaceable fowls. After which another man came, and preached sermons on the Green, and a great many people went to hear him; for those were "trying times," and folk ran hither and thither for comfort. And then what did they do but drill the ploughboys on the Green, to get them ready to fight the French, and teach them the goose-step! However, that came to an end at last, for Bony was sent to St. Helena, and the ploughboys were sent back to the plough.

Everybody lived in fear of Bony in those days, especially the naughty children, who were kept in order during the day by threats of, "Bony shall have you," and who had nightmares about him in the dark. They thought he was an Ogre in a cocked hat. The Grey Goose thought he was a fox, and that all the men of England were going out in red coats to hunt him....