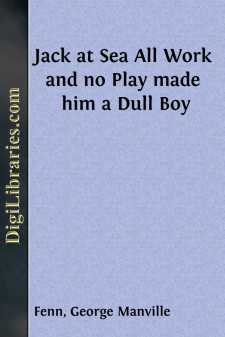 When a boy is not a boy.

“Fine morning, Jack; why don’t you go and have a run?”

John Meadows—always “Jack,” because his father’s name was John—upon hearing that father’s voice, raised his dull, dreamy eyes slowly from the perusal of the old Latin author over which he was bending, and looked in Sir John’s face, gazing at him inquiringly as if he had been walking with Cicero in Rome—too far away to hear the question which had fallen upon his ears like a sound which conveyed no meaning.

Father and son were as much alike as a sturdy sun-browned man of forty can resemble a thin, pale youth of sixteen or so. In other words, they possessed the same features, but the elder suggested an outdoor plant, sturdy and well-grown, the younger a sickly exotic, raised in the hot steaming air of the building which gardeners call a stove, a place in which air is only admitted to pass over hot-water pipes, for fear the plants within should shiver and begin to droop.

Sir John had just entered the handsome library, bringing with him a good breezy, manly suggestion of having been tramping through woods and over downs; and as soon as he had closed the door, he glanced at the large fire near to which his son had drawn a small writing-table, said “Pff!” unbuttoned his rough heather-coloured Norfolk jacket, raised his eyes to the window as if he would like to throw it open, and then lowered them and wrinkled up his forehead as he gazed at his son, carefully dressed in dark-brown velvet, and wearing correctly fitting trousers and patent leather shoes, a strong contrast to his own knickerbockers, coarse brown knitted stockings, and broad-soled shooting-boots.

Sir John looked anxious and worried, and he stretched out a strong brown hand to lay upon his son’s shoulder, but he let it fall again, drew a deep breath, and then very gently asked him the question about the walk.

“Did you speak to me, father?” said the lad vacantly.

“Speak to you!” cried Sir John, in an impatient, angry tone, “of course I spoke to you. It worries me to see you so constantly sitting over the fire reading.”

“Does it, father?” said the lad, wincing at the tone in which these words were spoken, and looking up in an apologetic way.

“I didn’t mean to speak to you so sharply, my boy,” continued Sir John, “but I don’t like to see you neglecting your health so. Study’s right enough, but too much of a good thing is bad for any one. Now, on a fine morning like this—”

“Is it fine, father? I thought it was cold.”

“Cold! Tut—tut—tut! The weather is never cold to a healthy, manly boy.”

“No, Jack, nor healthy neither; you are troubling me a great deal.”

“You are not, sir,” cried Sir John, “and never will be if you spend all your time over books.”

The lad gave him a sad, weary look.

“I thought you wanted me to study hard, father,” he said reproachfully....