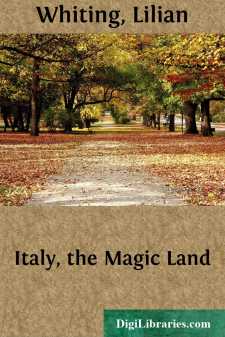 THE PERIOD OF MODERN ART IN ROME But ah, that spring should vanish with the Rose!That youth’s sweet-scented manuscript should close?The nightingale that in the branches sang,Oh, where and whither flown again,—who knows?

Rome, as the picturesque city of the Popes in the middle years of the nineteenth century, was resplendent in local color. It was the Rome of sunny winters; the Rome of gay excursions over that haunted sea of the Campagna to pictorial points in the Alban and Sabine hills; the Rome of young artist life, which organized impromptu festas with Arcadian freedom, and utilized the shadow or the shelter of ruined temples or tombs in which to spread its picnic lunches and bring the glow of simple, friendly intercourse into the romantic lights of the poetic, historic, or tragic past. There were splendid Catholic processions and ceremonials that seemed organized as a part of the stage scenery that ensconced itself, also, with the nonchalance of easy possession, in the vast salons of historic palaces where tapestried walls and richly painted ceilings, arched high overhead, with statues dimly seen in niches here and there, and the bust of some crowned Antoninus, or radiant Juno, gleaming from a shadowy corner, all made up the mise-en-scène of familiar evenings. There were lingering hours in the gardens of the Villa Medici into whose shades one strolled by that beguiling path along the parapet on Monte Pincio, through the beautiful grove with its walks and fountains. The old ilex bosquet, with its tangled growth and air of complete seclusion, had its spell of fascination. Then, as now, the elevated temple, at the end of the main path, seemed the haunt of gods and muses. In all the incidental, as well as the ceremonial social meeting and mingling, art and religion were the general themes of discussion. This idyllic life—

“Comprehending, too, the soul’sAnd all the high necessities of art”—

has left its impress on the air as well as its record on many a page of the poet and the romancist. The names that made memorable those wonderful days touch chords of association that still vibrate in the life of the hour. For the most part the artists and their associates have gone their way—not into a Silent Land, a land of shadows and vague, wandering ghosts—but into that realm wherein is the “life more abundant,” of more intense energy and of nobler achievement; the realm in which every aspiration of earth enlarges its conception and every inspiration is exalted and endowed with new purpose; the realm where, as Browning says,—

The poet’s vision recognizes the truth:—

“I know there shall dawn a day,—Is it here on homely earth?Is it yonder, worlds away,Where the strange and new have birth,That Power comes in full play?”

The names of sculptor, painter, and poet throng back, imaged in that retrospective mirror which reflects a vista of the past, rich in ideal creation. Beautiful forms emerge from the marble; pictorial scenes glow from the canvas; song and story and happy, historic days are in the very air....