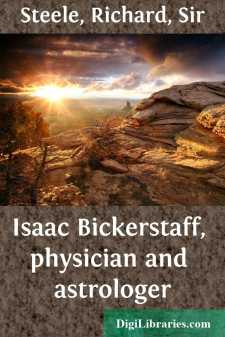 Of the relations between Steele and Addison, and the origin of Steele's "Tatler," which was developed afterwards into the "Spectator," account has already been given in the introduction to a volume of this Library, * containing essays from the "Spectator"—"Sir Roger de Coverley and the Spectator Club." There had been a centre of life in the "Tatler," designed, as Sir Roger and his friends were designed, to carry the human interest of a distinct personality through the whole series of papers. The "Tatler's" personality was Isaac Bickerstaff, Physician and Astrologer; as to years, just over the grand climacteric, sixty-three, mystical multiple of nine and seven; dispensing counsel from his lodgings at Shire Lane, and seeking occasional rest in the vacuity of thought proper to his club at the "Trumpet."

The name of Isaac Bickerstaff Steele borrowed from his friend Swift, who, just before the establishment of the "Tatler," had borrowed it from a shoemaker's shop-board, and used it as the name of an imagined astrologer, who should be an astrologer indeed, and should attack John Partridge, the chief of the astrological almanack makers, with a definite prediction of the day and hour of his death. This he did in a pamphlet that brought up to the war against one stronghold of superstition an effective battery of satire. The pamphlet itself has been given in our volume of "The Battle of the Books, and other short pieces, by Jonathan Swift." * The joke once set rolling was kept up in other playful little pamphlets written to announce the fulfilment of the prophecy, and to explain to Partridge that, whether he knew it or not, he was dead. This joke was running through the town when Steele began his "Tatler" on the 12th of April, 1709. Steele kept it going, and, in doing so, wrote once or twice in the character of Bickerstaff. Then he proceeded to develop the astrologer into a central character, who should give life and unity to his whole series of essays.

They were published for a penny a number, at the rate of three numbers a week. Steele, for his threepence a week, sought to give wholesome pleasure while good-humouredly helping men to rise above the vices and the follies of their time. Evil ways of the court of Charles the Second still survived in empty tradition. The young man thought it polite to set up for an atheist, said Steele, though it could be proved on him that every night he said his prayers. It was fashionable to speak frivolously of women, and affect contempt of marriage, though the English were, and are, of all men the most domestic. Steele made it a part of his duty to break this evil custom, to uphold the true honour of womanhood, and assert the sacredness of home. The two papers in this collection, called "Happy Marriage" and "A Wife Dead," are beautiful examples of his work in this direction. He attacked the false notions of honour that kept duelling in fashion. Steele could put his heart into the direct telling of a tale of human love or sorrow, and in that respect was unapproached by Addison; but he was surpassed by Addison in a subtle delicacy of touch, in the fine humour with which he played about the whims and weaknesses of men. The tenth paper in this volume, "A Business Meeting," is a good example of what Addison could do in that way.

Of the papers in this volume, the first was sent to Steele by the post, and—Steele wrote in the original Preface to the completed "Tatler"—"written, as I since understand, by Mr. Twisdon, who died at the battle of Mons, and has a monument in Westminster Abbey, suitable to the respect which is due to his wit and valour." The other papers were all written by Steele, with these exceptions:—No. V., "Marriage of Sister Jenny," and No. VII., "The Dream of Fame," were described by Steele, in a list given to Tickell, as written by himself and Addison together....