Is Mars habitable? A critical examination of Professor Percival Lowell's book "Mars and its canals," with an alternative explanation 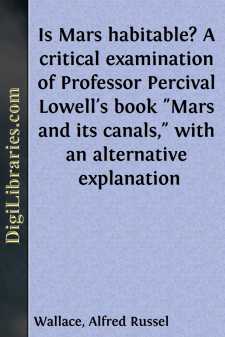 CHAPTER I. EARLY OBSERVERS OF MARS.

Few persons except astronomers fully realise that of all the planets of the Solar system the only one whose solid surface has been seen with certainty is Mars; and, very fortunately, that is also the only one which is sufficiently near to us for the physical features of the surface to be determined with any accuracy, even if we could see it in the other planets. Of Venus we probably see only the upper surface of its cloudy atmosphere.[1] As regards Jupiter and Saturn this is still more certain, since their low density will only permit of a comparatively small proportion of their huge bulk being solid. Their belts are but the cloud-strata of their upper atmosphere, perhaps thousands of miles above their solid surfaces, and a somewhat similar condition seems to prevail in the far more remote planets Uranus and Neptune. It has thus happened, that, although as telescopic objects of interest and beauty, the marvellous rings of Saturn, the belts and ever-changing aspects of the satellites of Jupiter, and the moon-like phases of Venus, together with its extreme brilliancy, still remain unsurpassed, yet the greater amount of details of these features when examined with the powerful instruments of the nineteenth century have neither added much to our knowledge of the planets themselves or led to any sensational theories calculated to attract the popular imagination.

[Footnote 1: Mercury also seems to have a scanty atmosphere, but as its mass is only one-thirtieth that of the earth it can retain only the heavier gases, and its atmosphere may be dust-laden, as is that of Mars, according to Mr. Lowell. Its dusky markings, as seen by Schiaparelli, seem to be permanent, and they are also for considerable periods unchangeable in position, indicating that the planet keeps the same face towards the sun as does Venus. This was confirmed by Mr. Lowell in 1896. Its distance from us and unfavourable position for observation must prevent us from obtaining any detailed knowledge of its actual surface, though its low reflective power indicates that the surface may be really visible.]

But in the case of Mars the progress of discovery has had a very different result. The most obvious peculiarity of this planet—its polar snow-caps—were seen about 250 years ago, but they were first proved to increase and decrease alternately, in the summer and winter of each hemisphere, by Sir William Herschell in the latter part of the eighteenth century. This fact gave the impulse to that idea of similarity in the conditions of Mars and the earth, which the recognition of many large dusky patches and streaks as water, and the more ruddy and brighter portions as land, further increased. Added to this, a day only about half an hour longer than our own, and a succession of seasons of the same character as ours but of nearly double the length owing to its much longer year, seemed to leave little wanting to render this planet a true earth on a smaller scale. It was therefore very natural to suppose that it must be inhabited, and that we should some day obtain evidence of the fact....