Is Life Worth Living? 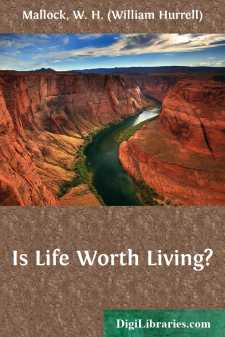 My dear Mr. Ruskin,—You have given me very great pleasure by allowing me to inscribe this book to you, and for two reasons; for I have two kinds of acknowledgment that I wish to make to you—first, that of an intellectual debtor to a public teacher; secondly, that of a private friend to the kindest of private friends. The tribute I have to offer you is, it is true, a small one; and it is possibly more blessed for me to give than it is for you to receive it. In so far, at least, as I represent any influence of yours, you may very possibly not think me a satisfactory representative. But there is one fact—and I will lay all the stress I can on it—which makes me less diffident than I might be, in offering this book either to you or to the world generally.

The import of the book is independent of the book itself, and of the author of it; nor do the arguments it contains stand or fall with my success in stating them; and these last at least I may associate with your name. They are not mine. I have not discovered or invented them. They are so obvious that any one who chooses may see them; and I have been only moved to meddle with them, because, from being so obvious, it seems that no one will so much as deign to look at them, or at any rate to put them together with any care or completeness. They might be before everybody's eyes; but instead they are under everybody's feet. My occupation has been merely to kneel in the mud, and to pick up the truths that are being trampled into it, by a headstrong and uneducated generation.

With what success I have done this, it is not for me to judge. But though I cannot be confident of the value of what I have done, I am confident enough of the value of what I have tried to do. From a literary point of view many faults may be found with me. There may be faults yet deeper, to which possibly I shall have to plead guilty. I may—I cannot tell—have unduly emphasized some points, and not put enough emphasis on others. I may be convicted—nothing is more likely—of many verbal inconsistencies. But let the arguments I have done my best to embody be taken as a whole, and they have a vitality that does not depend upon me; nor can they be proved false, because my ignorance or weakness may here or there have associated them with, or illustrated them by, a falsehood. I am not myself conscious of any such falsehoods in my book; but if such are pointed out to me, I shall do my best to correct them. If what I have done prove not worth correction, others coming after me will be preferred before me, and are sure before long to address themselves successfully to the same task in which I perhaps have failed. What indeed can we each of us look for but a large measure of failure, especially when we are moving not with the tide but against it—when the things we wrestle with are principalities and powers, and spiritual stupidity in high places—and when we are ourselves partly weakened by the very influences against which we are struggling?