Is civilization a disease? 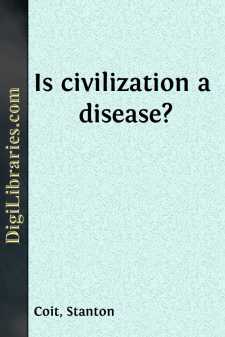 I. TRADE TYPICAL OF CIVILIZATION

In choosing "The Morals of Trade" as the general title of the Weinstock Lectureship, I am informed that its founder meant the word "Trade" to be understood in its comprehensive sense, as commensurate with our whole system of socialized wealth—at least, upon the present occasion I shall interpret it in this broad way.

I shall furthermore ask you to consider our system of socialized wealth—its practice and principles—in relation to the whole of that vast artificial structure of human life which is labelled "Civilization," and which began to prevail some ten thousand years ago. Such a comprehensive sweep of vision is, in my judgment, necessary if we are to view trade in true human perspective; nor can we estimate the degree of praise or blame we ought to confer upon it until we have determined the worth of civilization itself. For trade is not only bound up inextricably with the whole of our social order, but, as it seems to me, manifests in a most acute form the universal character of civilization in general. We must therefore discover the structural principle which began to co-ordinate the lives of any group of human beings when their tribe finally passed out of barbarism. Having discovered this, we shall be able to judge whether by its ever-advancing application to the life of men, and its ever-increasing domination over their wills, it has furthered the cause of ideal humanity or not. If we find that it has been essentially humane, we shall have arrived at the conclusion that its offspring, trade, is moral. If, however, we unearth in the very principle of historic civilization something radically wrong, anti-human and inhuman, and if we can discover another co-ordinating principle which is humane and feasible, civilization will then be seen to be a thing to be "superseded"—as Nietzsche thought man himself was—and trade, its latest and lustiest issue, will be felt to be a usurper deserving to be disinherited in favor of some true economic child of the "Holy Spirit of Man."

In order to open such lines of anthropological investigation and ethical reflection, I have raised the question: "Is Civilization a Disease?"

Had I asked, "Is Civilization Christian?" I should have defeated my own end. You would have answered "No" as soon as you saw the subject of my discourse announced, and would have stayed at home. But you might still have given your ethical sanction to trade. You might have said, "It does not pretend to be Christian; but that is nothing against it, for the vital principle of Christianity is sentimental and impracticable: and what won't work can't be right."

Had I raised the question in the form, "Could trade ever have emanated from an intelligent motive of universal love—of deference for the humanity in every man?" you would have replied, "Never!" But you might have consoled yourself with the thought that it is only a small part of our boasted civilization. We have art and education and family life and monogamy and religion; and these come in as correctives, so that trade, although not conceived of benevolence and not bearing the stamp of humanity in its character, is comparatively harmless under the restraints laid upon it....