Irish Race in the Past and the Present 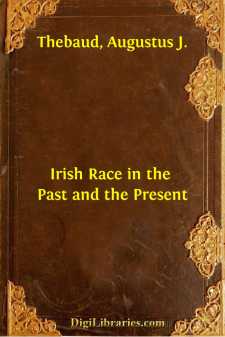 "In the Southern Ocean, the greater part of Australia, Tasmania, Norfolk, Van Diemen's Land, New Zealand, and many other groups of Oceanica are hers.

"What other state can compete with her in the management of colonies, and in the selection of situations from which she could command the sea? Jersey and Guernsey are her keys of the Straits of Dover; from Heligoland she can open or shut the mouths of the Elbe and Weser; from Gibraltar she keeps her eye on Spain and the States of Barbary, and holds the gates of the Mediterranean. With Malta and Corfu she has a like advantage over the Levant. Socotora is for her the key of the Red Sea, whence she commands Eastern Africa and Abyssinia. Ormuz, Chesmi, and Buschir, give her the mastery over the Persian Gulf, and the large rivers which flow into it. Aden secures the communication of Bombay with Suez. Pulo Pinang makes her mistress of the Straits of Malacca, and Singapore, of the passage between China and India. At the Cape of Good Hope her troops form an advanced guard over the Indian Ocean; and from Jamaica she rules the Antilles and trades securely with the rest of Central and South America.

"Englishmen have made a careful survey of the whole of the Mediterranean Sea, of the course of the Indus, the Ganges, the Bramaputra, the Godavery, and other rivers of India; of the whole littoral between Cape Colony and China; England has steamships on the Amazon and Niger, and her vessels are found everywhere on the coast of Chili and Peru."

Other European families try to follow in her footsteps; at their head the United States now stand. Primitively an offshoot of the English stock, the blood of all other Japhetic races has given the latter country an activity and boldness which will render it in time superior in those respects to the mother-country herself.

Unfortunately, her first aim, after acquiring wealth and securing her power, is, to exclude the Roman Catholic Church as far as is practicable from the benefit of the system, to oppose her whenever she would follow in the wake of her progress, and either to allow paganism or Mohammedanism to continue in quiet possession wherever they exist, or to substitute for them as far as possible her Protestantism. At all events, the Catholicity of the Church is to be crushed, or at least thwarted, to make room for the catholicity of the English nation.

And it looks as though such, in truth, would have been the result, had not the stubbornness of the Irish character stood in the way; if the Celt of Erin, after centuries of oppression and opposition to the false wanderings of the European stream, had not insisted on following the English lord in his travels, dogging his steps everywhere, entering his ships welcome or unwelcome, rushing on shore with him wherever he thought fit to land, and there planted his shanty and his frame church in the very sight of stately palaces lately erected, and gorgeous temples with storied windows and softly-carpeted floors.

And after a few years the Irish Celt would show himself as active and industrious in his new country as oppression had made him indolent and careless on his own soil; the shanty would be replaced by a house worthy of a man; above all, the humble dwelling which he first raised to his God would disappear to make room for an edifice not altogether unworthy of divine majesty; at least, far above the pretentious structures of the oppressors of his religion....