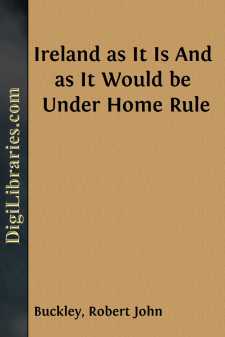 Irish Loyalists will not soon forget the early part of 1893. Arriving in Dublin in March, it at once became evident that the industrial community regarded Home Rule, not with the academical indifference attributed to the bulk of the English electorate, but with absolute dismay; not as a possibility which might be pleasantly discussed between friends, but as a wholly unnecessary measure, darkly iniquitous, threatening the total destruction of all they held dear. English lukewarmness was hotly resented, but the certainty that England must herself receive a dangerous if not a mortal wound, was scant comfort to men who felt themselves on the eve of a hopeless struggle for political, nay, even for material existence. This was before the vast demonstrations of Belfast and Dublin, before the memorable function in the Albert Hall, London, before the hundreds of speakers sent forth by the Irish Unionist Alliance had visited England, spreading the light of accurate knowledge, returning to Ireland with tidings of comfort and joy. The change in public feeling was instant and remarkable. Although from day to day the passage of the Bill through the Commons became more and more a certainty, the Irish Unionists completely discarded their fears, resuming their normal condition of trust and confidence. Mr. H.L. Barnardo, J.P., of Dublin, aptly expressed the universal feeling when he said:—

"We have been to England, and we know three things,—that the Bill will pass the Commons, that the Lords will throw it out, and that the English people don't care if they do."

This accounted for the renewed serenity of the well-doing classes, whose air and attitude were those of men thankful for having narrowly escaped a great danger. The rebound was easily observable in cities like Dublin and Belfast, where also was abundantly evident the placid resignation of the Separatist forces, whose discontent with the actual Bill and profound distrust of its framer, superadded to an ever-increasing qualmishness inevitably arising from acquaintance with the prospective statesmen of an Irish Legislature, caused them to look forward to the action of the Lords with ill-disguised complacency. In regions more remote the scattered Loyalists lacked the consolation arising from numbers and propinquity to England, and accordingly their tremors continued, and, in a smaller degree, continue still. To them the Bill is a matter of life and death; and while their industry is crippled, their mental peace is destroyed by the ever-present torture of suspense.

As to the merits of the case for Home Rule, I would earnestly ask fair-minded opponents to remember that during my wanderings I met with numbers of intelligent and honourable men, both Scots and English, who having come to Ireland as earnest, nay, even by their own confession, as bigoted Gladstonians, had changed their opinions on personal acquaintance with the facts, and strove with all the energy of conscientious men who had unwittingly led others astray, to repair, so far as in them lay, the results of their former political action. And it should be especially noted that of all those I so met who had arrived in Ireland as Home Rulers, not one retained his original faith. A very slight process of inductive reasoning will develop the suggestiveness of this incontestible fact.

Readers will hardly require to be reminded that the letters were written, not in studious retirement with ample time at command, but for a Daily Paper, at the rate of nearly eight newspaper columns a week, in the intervals of travel and inquiry, often under grave difficulties and with one eye on the inexorable clock. The precepts of the Master were of necessity ignored:—

But before committing them to paper, the facts were sifted with scrupulous care, and where personal investigation was impracticable, nothing was adduced except upon evidence of weight and authority sufficient to prove anything. And as during a six months' hue and cry of the Nationalist press of Ireland, aided and abetted by some English prints, no single statement was in any degree shaken, the letters have re-appeared precisely as at first.

The Birmingham Daily Gazette of August 18, 1893, thus summed up the labours of its Special Commissioner:—We publish to-day the last of our Special Commissioner's letters on "Ireland As It Is." His task has been an arduous one, and not without a strong element of personal danger....