Introduction to the Study of History 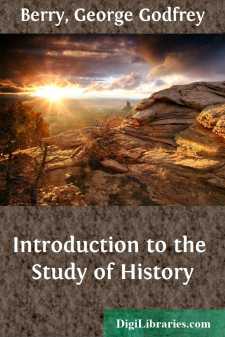 It is a pleasure to recommend this useful and well-written little book to English readers. It will both interest and help. There are, for instance, a few pages devoted to the question of evidence that will be an aid to every one desirous of getting at the truth respecting any series of facts, as well as to the student of history. No one can read it without finding out that to the historian history is not merely a pretty but rather difficult branch of literature, and that a history book is not necessarily good if it appears to the literary critic 'readable and interesting,' nor bad because it seems to him 'hard or heavy reading.' The literary critic, in fact, is beginning to find out that he reads a history as he might read a treatise on mathematics or linguistics, at his peril, and that he is no judge of its value or lack of value. Only the expert can judge that. It will probably surprise some people to find that in the opinion of our authors (who agree with Mr. Morse Stephens and with the majority of scholars here) the formation and expression of ethical judgments, the approval or condemnation of Caius Julius Cæsar, or of Cæsar Borgia, is not a thing within the historian's province. His business is to find out what can be known about the characters and situations with which he is engaged, to put what he can ascertain before his readers in a clear form, and lastly to consider and attempt to ascertain what scientific use can be made of these facts he has ascertained. Ethic on its didactic side is outside his business altogether. In fact MM. Langlois and Seignobos write for those "who propose to deal with documents [especially written documents] with a view to preparing or accomplishing historic work in a scientific way." They have the temerity to view history as a scientific pursuit, and they are endeavouring to explain to the student who intends to pursue this branch of anthropologic science the best and safest methods of observation open to him, hence they modestly term their little book "an essay on the method of historic sciences." They are bold enough to look forward to a day, as not far distant, when a sensible or honest man will no more dare to write history unscientifically than he would to-day be willing to waste his time and that of others on observing the heavens unscientifically, and registering as trustworthy his unchecked and untimed observations.

Whether we like it or not, history has got to be scientifically studied, and it is not a question of style but of accuracy, of fulness of observation, and correctness of reasoning, that is before the student. Huxley and Darwin and Clifford have shown that a book may be good science and yet good reading. Truth has not always been found repulsive although she was not bedizened with rhetorical adornments; indeed, the very pursuit of her has long been recognised as arduous but extremely fascinating. Toute trouvaille, as our authors aptly remark, procure une jouissance.

It will be a positive gain to have the road cleared of a mass of rubbish, that has hindered the advance of knowledge. History must be worked at in a scientific spirit, as biology or chemistry is worked at. As M. Seignobos says, "On ne s'arrête plus guère aujourd'hui à discuter, sous sa forme théologique la théorie de la Providence dans l'Histoire. Mais la tendence à expliquer les faits historiques par les causes transcendantes persiste dans des théories plus modernes où la metaphysique se déguise sous des formes scientifiques." We should certainly get rid in time of those curious Hegelianisms "under which in lay disguise lurks the old theologic theory of final causes"; or the pseudo-patriotic supposition of the "historic mission (Beruf) attributed to certain people or persons." The study of historic facts does not even make for the popular newspaper theory of the continuous and necessary progress of humanity, it shows only "partial and intermittent advances, and gives us no reason to attribute them to a permanent cause inherent in collective humanity rather than to a series of local accidents." But the historian's path is still like that of Bunyan's hero, bordered by pitfalls and haunted by hobgoblins, though certain of his giant adversaries are crippled and one or two slain. He has also his own faults to master, or at least to check, as MM....