Introduction of the Locomotive Safety Truck Contributions from the Museum of History and Technology: Paper 24 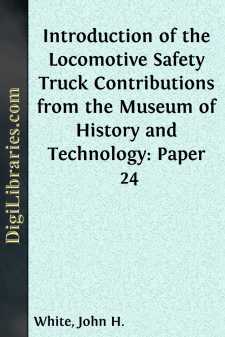 American railroads of the early 19th century were cheaply and hastily built. They were characterized by inferior roadbeds, steep grades, sharp curves, and rough track. In spring, poor drainage and lack of ballast might cause the track to sink into the soggy roadbed and produced an unstable path. In winter this same roadbed could freeze into a hard and unyielding pavement on which the rolling stock was pounded to pieces.

In those pioneering times the demand for new roads left little capital to improve or expand existing lines; therefore equipment was needed that could accommodate itself to the existing operating conditions.

The first locomotives used in this country had been imported from England. Designed for well-ballasted track with large-radius curves and gentle gradients, they all too frequently left the rails, and the unsuitability of the essentially rigid British design soon became apparent.

The challenge posed by the American roadbed was met by American mechanics. By the mid-1830’s a distinctive American locomotive had evolved that might best be described by the word “flexible.” The basic features of its running gear were a bar frame and equalizing levers to provide vertical relief and a leading truck to provide lateral relief. Of these devices the truck was probably the most important, and more readily than any one component distinguished the American running gear from that used by the British before 1860.

Figure 1.—Design drawing showing the 4-wheel leading truck, developed in 1831 by John B. Jervis, applied to the Brother Jonathan. This locomotive, one of the earliest to use a leading truck, was built in June 1832 by the West Point Foundry Association for the Mohawk and Hudson Rail Road. The truck is attached to the locomotive frame by a center pin, but the forward weight of the locomotive is carried by a roller which bears on the frame of the truck. (Smithsonian photo 36716-a)

It was John B. Jervis who is generally credited with first applying the truck to the locomotive. His design, shown in , was developed in 1831–32. Its merits quickly became apparent, and by 1835 it [p119] had been universally recognized in this country. The truck successfully led the locomotive around sharp curves, the resultant 3-point suspension enabled the machine to traverse even the roughest of tracks, and, altogether, the design did far less damage to the lightly built U.S. lines than did the rigid, imported engines.

The truck frame, fabricated from iron straps and castings, was attached to the locomotive by a pin around which it might rotate. At first the weight was received by rollers or chafing pads mounted on the side beams of the truck. However, the friction of these bearing surfaces and their location at a considerable distance from the center pin combined to restrict the free movement of the truck. By the early 1850’s the point of bearing was transferred to the center plate, producing a truck that turned more freely.