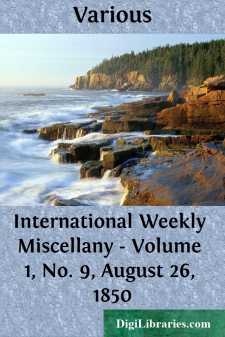 A magnificent work upon this subject has just been completed in Paris, where it was commenced fifteen years ago. It was begun under the auspices of M. Paul Delaroche and M.C. Lenormand, member of the Institute, and well known already as one of the first authorities in the numismatic branch of archæology. Some faint idea of the greatness of the task may be given by stating that it embraces the whole range of art, from the regal coins of Syracuse and of the Ptolemies, down to those of our day; that such a stupendous scheme should ever have been carried into execution is not solely due to the admirable ease and fidelity, with which the "Collas machine" renders the smallest and the largest gems of the antique: but to him who first felt, appreciated, and afterward promoted its capabilities in this labor of love, M.A. Lachevardiere. Comparisons and contrasts, which are the life of art, though generally confined to the mental vision, are not the least of the recommendations of this vast work. For the first time have the minor treasures of each country been brought together, and not the least conspicuous portion are those from the British Museum and the Bank of England.

Whether we consider the selection of these monumental relics, the explanatory letterpress, or the engravings which reproduce them, we are struck by the admirable taste, science, and fidelity with which the largest as well as the smallest gems have each and every one been made to tally in size with the originals.

The collection of the "Trésor de Numismatique et Glyptique," consisting of twenty volumes in folio, and containing a thousand engraved plates in folio, reproduces upward of 15,000 specimens, and is divided into three classes—1st. The coins, medals, cameos, &c. of antiquity; 2d. Those of the middle ages; lastly, those of modern times. The details of this immense mass of artistic wealth would be endless; but these three classes seem to be arranged according to the latest classification of numismatists.

In the first class may be noticed—1. The regal coins of Greece, which contains, beside the portraits of the Greek Kings, to be found in Visconti's "Iconographie," copied from medals and engraved gems, all the coins bearing the Greek name of either a king, a prince, or a tyrant, and every variety of these types, whether they bear the effigy of a prince, or only reproduce his name. To the medals of each sovereign are joined the most authentic and celebrated engraved gems of European cabinets. Next come the series of portraits of the Roman emperors and their families, with all the important varieties of Roman numismatics, amongst which will be found the most celebrated coins of France, Vienna, Dresden, Munich, Florence, Naples, St. Petersburg, Weimar, &c.; and, moreover, those medallions which perpetuate great events. These two volumes contain eight-fold more matter than the great work of Visconti.

In the second class, containing the works of the middle ages, and showing the uninterrupted progress of the numismatic art down to modern times, and forming alone fourteen volumes, we find the source which the French artists and men of letters have studied with such predilection....