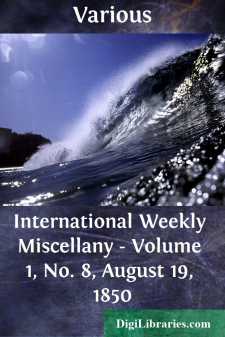 THE THEATER IN RUSSIA AND POLAND.

The following interesting sketch of the Drama in the empire of the Czar is translated for the International from the Leipzig Grenzboten. The facts it states are not only new to most readers, but throw incidentally a good deal of light on the condition of that vast empire, and the state of its population in respect of literature and art in general:

The dramatic taste of a people, the strength of its productive faculty, the gradual development of its most popular sphere of art, the theater, contain the key to phases of its character which cannot always be recognized with the same exactness from other parts of its history. The tendencies and disposition of the mass come out very plainly in their relations to dramatic art, and from the audience of an evening at a theater some inference may be drawn as to the whole political scope of the nation. In truth, however, this requires penetration as well as cautious judgment.

In the middle of the last century there were in the kingdom of Poland, beside the royal art institutions at Warsaw, four strong dramatic companies, of genuine Polish stamp, which gave performances in the most fashionable cities. Two of them were so excellent that they often had the honor to play before the court. The peculiarity of these companies was that they never performed foreign works, but literally only their own. The managers were either themselves poets, or had poets associated with them in business. Each was guided by his poet, as Wallenstein by his astrologer. The establishment depended on its dramatic ability, while its performances were limited almost exclusively to the productions of its poet. The better companies, however, were in the habit of making contracts with each other, by which they exchanged the plays of their dramatists. This limitation to native productions perhaps grew partly out of the want of familiarity with foreign literature, partly from national feeling, and partly from the fact that the Polish taste was as yet little affected by that of the Germans, French, or English. In these circumstances there sprung up a poetic creative faculty, which gave promise of a good and really national drama. And even now, after wars, revolutions, and the schemes of foreign rulers have alternately destroyed and degraded the stage, and after the Poles have become poetically as well as politically mere satellites of French ideas and culture, there still exist, as respectable remains of the good old time, a few companies of players, which, like their ancient predecessors, have their own poets, and perform only his pieces, or at least others of Polish origin that he has arranged and adapted. Such a company, whose principal personage is called Richlawski, is now in Little Poland, in the cities Radom, Kielce, Opatow, Sandomir, &c. A second, which generally remains in the Government of Kalisch, is under the direction of a certain Felinski, and through his excellent dramatic compositions has gained a reputation equal to that of the band of Strauss in music....