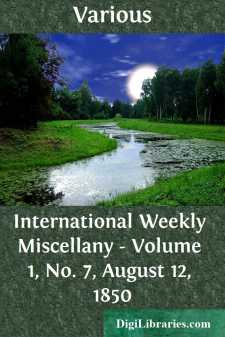 WOMEN AND LITERATURE IN FRANCE.

From a sprightly letter from Paris to the Cologne Gazette, we translate for The International the following account of the position of women in the French Republic, together with the accompanying gossip concerning sundry ladies whose names have long been quite prominently before the public:

"It is curious that the idea of the emancipation of women should have originated in France, for there is no country in Europe where the sex have so little reason to complain of their position as in this, especially at Paris. Leaving out of view a certain paragraph of the Code Civile—and that is nothing but a sentence in a law-book—and looking closely into the features of women's life, we see that they are not only queens who reign, but also ministers who govern.

"In France women are engaged in a large proportion of civil employments, and may without hesitation devote themselves to art and science. It is indeed astonishing to behold the interest with which the beautiful sex here enter upon all branches of art and knowledge.

"The ateliers of the painters number quite as many female as male students, and there are apparently more women than men who copy the pictures in the Louvre. Nothing is more pleasing than to see these gentle creatures, with their easels, sitting before a colossal Rubens or a Madonna of Raphael. No difficulty alarms them, and prudery is not allowed to give a voice in their choice of subjects.

"I have never yet attended a lecture, by either of the professors here, but I have found some seats occupied by ladies. Even the lectures of Michel Chevalier and Blanqui do not keep back the eagerness of the charming Parisians in pursuit of science. That Michelet and Edgar Quinet have numerous female disciples is accordingly not difficult to believe.

"Go to a public session of the Academy, and you find the 'cercle' filled almost exclusively by ladies, and these laurel-crowned heads have the delight of seeing their immortal works applauded by the clapping of tenderest hands. In truth, the French savan is uncommonly clear in the most abstract things; but it would be an interesting question, whether the necessity of being not alone easily intelligible but agreeable to the capacity of comprehension possessed by the unschooled mind of woman, has not largely contributed to the facility and charm which is peculiar to French scientific literature. Read for example the discourse on Cabanis, pronounced by Mignet at the last session. It would be impossible to write more charmingly, more elegantly, more attractively, even upon a subject within the range of the fine arts. The works, and especially the historical works, of the French, are universally diffused. Popular histories, so-called editions for the people, are here entirely unknown; everything that is published is in a popular edition, and if as great and various care were taken for the education of the people as in Germany, France would in this respect be the first country in the world.

"With the increasing influence of monarchical ideas in certain circles, the women seem to be returning to the traditions of monarchy, and are throwing themselves into the business of making memoirs....