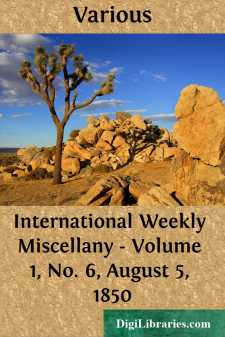 We translate the following for the International from a letter dated London, June 15, to the Cologne Gazette.

"Among the most remarkable writers of romances in England, three women are entitled to be reckoned in the first rank, namely, Miss Jewsbury, Miss Bronte, and Mrs. Gaskell. Miss Jewsbury issued her first work about four years since, a novel, in three volumes, under the title of 'Zoe,' and since then she has published the 'Half Sisters.' Both these works are excellent in manner as well as ideas, and show that their author is a woman of profound thought and deep feeling. Both are drawn from country life and the middle class, a sphere in which Miss Jewsbury is at home. The tendency of the first is speculative, and is based on religion; that of the second is social, relating to the position of woman.

"Miss Jewsbury is still young, for an authoress. She counts only some thirty years, and many productions may be confidently expected from her hand, though perhaps none will excel those already published, for, after gaining a certain climax, no one excels himself. Her usual residence is Manchester; it is but seldom that she visits the metropolis; she is now here. She has lively and pleasing manners, a slight person, fine features, a beautiful, dreamy, light brown eye. She is attractive without being beautiful, retiring, altogether without pretensions, and in conversation is neither brilliant nor very intellectual,—a still, thoughtful, modest character.

"Miss Bronte was long involved in a mysterious obscurity, from which she first emerged into the light as an actually existing being, at her present visit to London. Two years ago there appeared a romance, 'Jane Eyre,' by 'Currer Bell,' which threw all England into astonishment. Everybody was tormenting himself to discover the real author, for there was no such person as Currer Bell, and no one could tell whether the book was written by a man or woman, because the hues of the romance now indicated a male and now female hand, without any possibility of supposing that the whole originated with a single pencil. The public attributed it now to one, now to another, and the book passed to a second edition without the solution of the riddle. At last there came out a second romance, 'Shirley,' by the same author, which was devoured with equal avidity, although it could not be compared to the former in value; and still the incognito was preserved. Finally, late in the autumn of last year the report was spread about that the image of Jane Eyre had been discovered in London in the person of a pale young lady, with gray eyes, who had been recognized as the long-sought authoress. Still she remained invisible. And again, in June 1850, it is said that Currer Bell, Jane Eyre, Miss Bronte,—for all three names mean the same person,—is in London, though to all inquiries concerning the where and how a satisfactory answer is still wanting. She is now indeed here, but not for the curious public; she will not serve society as a lioness, will not be gazed and gaped at....