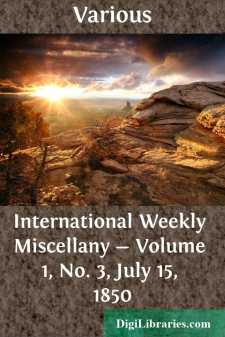 GEORGE SAND, IN THE MEMOIRS OF CHATEAUBRIAND.

George Sand is about to publish a book called "Memoirs of my Life," which is looked for with great expectations by both the admirers of her genius and the lovers of scandalous gossip. It is certain that if she makes a clean breast of her adventures and experiences, the world will have reason both for admiration and disgust over the confessions: admiration for the generosity of her character—for she never did a mean thing, and probably never had a mean thought—disgust at the recklessness with which she has cast off the delicacy and modesty of woman, and undermined the morality on which the holiest institutions of society depend. The interest with which the French public look forward to the book may be understood from the enormous price she has received for it between $30,000 and $40,000. The Credit, a most respectable daily journal of Paris, has purchased of the publisher, for $12,000, the right of issuing the first six volumes in its feuilleton, in advance of the regular publication, and will soon commence them.

Chateaubriand, in one of the latest chapters of his Posthumous Memoirs, speaks at some length of George Sand. The verdict of the most illustrious French literary man of the age which has just closed, upon this most remarkable writer of the age now passing, is every way interesting, and we translate it for the International from the columns of La Presse, as follows:

Madame Sand possesses talents of the first order. Her descriptions are true as those of Rousseau in his Reveries, and those of Bernardin St. Pierre in his Studies. Her free style is stained by none of the current faults of the day. Lelia, a book painful to read, and offering only here and there one of the delicious scenes which may be found in Indiana and Valentine, is nevertheless a master-work of its kind. Of the nature of a debauch, it is yet without passion, though it produces the disturbance of passion. The soul is wanting, but still it weighs upon the heart. Depravity of maxims, insult to rectitude of life, could not go farther; but over the abyss descends the talent of the author. In the valley of Gomorrah the dew falls nightly upon the Dead Sea.

The works of Madame Sand, those romances, the poetry of matter, are born of the epoch. Notwithstanding her superiority, it is to be feared that the author has narrowed the circle of her readers by the very character of her writings. George Sand will never be a favorite with persons of all ages. Of two men equal in genius, one of whom preaches order and the other disorder, the first will attract the greater number of hearers. The human race never give unanimous applause to what wounds morality, on which repose the feeble and the just. We do not willingly associate with all the recollections of our life those books which caused us the first blush, and whose pages were not those we learned by heart as we left the cradle: books which we have read only in secret, which have never been our avowed and cherished companions, and which were never mingled with either the candor of our sentiments or the integrity of our innocence....