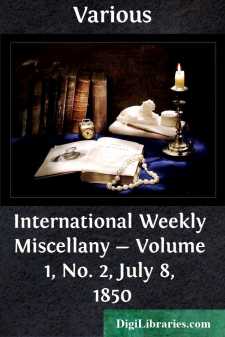 The LORGNETTE, the cleverest book of its kind (we were about to write, since the days of Addison, but to avoid possible disagreement say)—since IRVING and PAULDING gave us Salmagundi, is still coming before us at agreeable intervals, and will soon be issued in a brace of volumes illustrated by DARLEY. The Author keeps his promises, given in the following paragraphs some time ago:

"It would be very idle to pretend, my dear Fritz, that in printing my letters, I had not some hope of doing the public a trifling service. There are errors which need only to be mentioned, to be frowned upon; and there are virtues, which an approving word, even of a stranger, will encourage. Both of these objects belong to my plan; yet my strictures shall not be personal, or invidious. It will be easy, surely, to carry with me the sympathies of all sensible people, in a little harmless ridicule of the foibles of the day, without citing personal instance; and it will be vastly easier, in such Babylon as ours, to designate a virtue, without naming its possessor! Still, you know me too well, to believe that I shall be frightened out of free, or even caustic remark, by any critique of the papers, or by any dignified frown of the literary coteries of the city.... This LORGNETTE of mine will range very much as my whim directs. In morals, it will aim to be correct; in religion, to be respectful; in literature, modest; in the arts, attentive; in fashion, observing; in society, free; in narrative, to be honest; in advice, to be sound; in satire, to be hearty; and in general character, whatever may be the critical opinions of the small littérateurs, or the hints of fashionable patrons, to be only—itself."

The popularity of TENNYSON, in this country as well as in England, is greater than that of any other contemporary who writes verses in our language. We by no means agree to the justness of the common apprehension in this case. We think Bryant is a greater poet, and we might refer to others, at home and abroad, whom it delights us more to read. But it is unquestionable that Tennyson is the favorite of the hour, and every new composition of his will therefore be looked for with the most lively interest. His last work, just reprinted by TICKNOR, REED & FIELDS, of Boston, is thus described in the London Spectator of June 8th:

"Although only these words appear on the title-page of this volume of poetry, it is well known to be from the pen of Alfred Tennyson. It is also known that the inscription

refers to Mr. Arthur Hallam, a son of the historian. It may be gleaned from the book, that the deceased was betrothed to a sister of Tennyson, while the friendship on the poet's part has 'passed the love of women.' Feeling, especially in one whose vocation it is to express sentiments, is not, indeed, always to be measured by composition; since the earnest artist turns everything to account, and when his theme is mournful it is his cue to make it as mournful as he can: but when a thought continually mingles with casual observation, or incident of daily life, or larger event that strikes attention, as though the memory of the past were ever coloring the present, and that over a period of seventeen years, it must be regarded as a singular instance of enduring friendship, as it has shown itself in a very singular literary form....