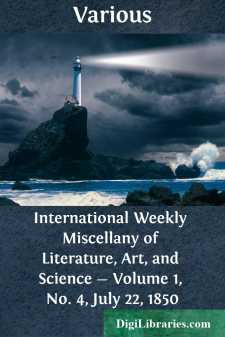 LITERARY COTERIES IN PARIS IN THE LAST CENTURY.

The revolutions of society are almost as sure if not as regular as those of the planets. The inventions of a generation weary after a while, but they are very likely to be revived if they have once ministered successfully to pleasure or ambition. The famous coteries in which learning was inter-blended with fashion in the golden age of French intelligence, are being revived under the new Republic, and women are again quietly playing with institutions and liberties, perhaps as dangerously as when Mesdames de Tencin, Pompadour, Geoffrin, Deffant, Poplinière and L'Espinasse assembled the destinies nightly in their drawing rooms.

The tendency to such associations is displayed also in most of our own cities. The Town and Country Club of Boston, the Wistar Parties in Philadelphia, the Literary Club in Charleston, the recent converzaziones at the houses of President Charles King of Columbia College, and others, and the well-known Saturday Evenings at Miss Lynch's, where literature and art and general speculation have for some seasons had a common center, all illustrate the disposition of an active and cultivated society, not engrossed by special or spasmodic excitements, to cluster by rules of feeling and capacity: and clusters of passion and mind are rarely for a long period inert. When they become common they are apt to assume the direction of private custom and public opinion and affairs.

In view of these things, we are sure that the readers of the International will be interested in the following translation of Professor Schlosser's brilliant survey of those bureaux d'esprit which so much distinguished society and influenced its history in Europe, from the beginning to the middle of the last century. Schlosser is a Privy Councillor and Professor of History in the University of Heidelberg. He is chiefly known in continental Europe by his great work, the History of the Eighteenth Century, and of the Nineteenth till the overthrow of the French Empire, a work which derives its value not merely from the profound and minute acquaintance of the author with the subject, from the new views which are presented and the hitherto unexamined sources from which much has been derived, but from his well-known independence of character—from the general conclusions which he draws from the comparative views of the resources, conduct, manners, institutions and literature of the great European nations, during a period unparalleled in the history of the world for the development of the physical and mental powers of mankind, for the greatness of the events which occurred, for the progress of knowledge, for the cultivation of the arts and sciences, for all that contributes to the greatness and prosperity of nations.

If we venture to bring the Parisian evening, dinner and supper parties into connection with the general history of Europe, and the ladies also at whose houses these parties took place, we can neither be blamed for scrupulous severity, nor for paradoxical frivolity....