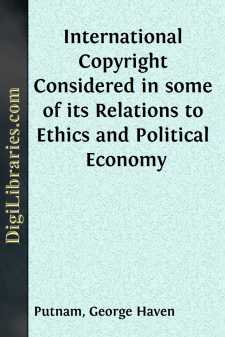 The questions relating to copyright belong naturally to the sphere of political economy. They have to do with the laws governing production, and with the principles regulating supply and demand; and they are directly dependent upon a due determining of the proper functions of legislation, and of the relations which legislation, having for its end the welfare of the community as a whole, ought to bear towards production and trade.

As students of economic science, we recognize the fact that, in all its phases, it is in reality based upon two or three very simple propositions, such as:

Two from one you can't.

That which a man has created by his own labor is his own, to do what he will with, subject only to his proportionate contribution to the cost of carrying on the organization of the community under the protection of which his labor has been accomplished, and to the single limitation that the results of his labor shall not be used to the detriment of his fellow-men.

It is not in the power of legislators to make or to modify the laws of trade; it is their business to act in accordance with these laws.

Economic science is, then, but the systematizing, on the basis of a few generally accepted principles, of the relations of men as regards their labor and the results of their labor, namely, their property. There is therefore an essential connection between the systems governing all these relations, however varied they may be. Soundness of thought in regard to one group of them leads to soundness of thought about the others.

Interested as we are in the work of bringing the community to a sound and logical standard of economic faith and practice, it is important for us to recognize and to emphasize the essential relations connecting as well the different scientific positions as the various sets of fallacious assumptions. Further, we can hardly lay too much stress upon the oft-repeated dictum that a system may be correct in theory yet pernicious in practice, maintaining, as we do, that where the application of a theory brings failure the result is due either to the unsoundness of the theory or to some blundering in its application.

We claim, also, that with reference to the rights of labor, property, and capital, the free-trader is the true protectionist. It is the free-trader who demands for the laborer the fullest, freest use of the results of his labor, and for the capitalist the widest scope in the employment of his capital; and it is he who asserts that the paternal authority which restricts the workingman in the free exchange of the products of his craft, which limits the directions and the methods for the use of capital, appropriates—or, to speak more strictly, destroys—a portion of the value of the labor and the capital, and prevents the ownership from being real or complete.

Authors are laborers, and their works are, as fully as is the case with any other class of laborers, the results of their own productive faculties and energies....