Interference and Other Football Stories 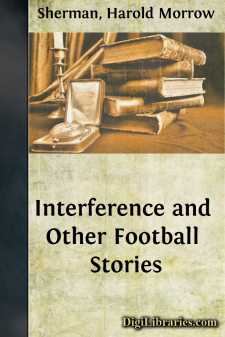 Mack Carver, substitute back on Grinnell University's varsity squad, stepped across the threshold of Coach Edward's office. He carried his one hundred and eighty-seven pounds easily and with an athletic swagger. But he scowled as he entered, indicating that his call was about an unpleasant matter.

"Well, boy—what's on your mind?" smiled the Coach, straightening up from a mass of papers which contained diagrams of the plays Grinnell was to use in her season's big game against Pomeroy, now less than a week away.

"Plenty!" was Mack's bluntly grim answer. He stood now, facing his coach, across the desk.

"I want to know why I've been kept so much of the time on the bench?" the substitute back fired, point blank.

"Because," answered Coach Edward, evenly, "there were eleven better men on the field. That's ordinarily the only reason any man's kept on the bench."

"I don't believe it," retorted Mack, feelingly. "You've had it in for me because my brother is coach at Pomeroy. That's the reason! And you'd like to be coach at Pomeroy yourself!"

Coach Edward drew in his breath, sharply. "Perhaps I would!" he said. "But that's a strict matter of business—nothing personal!"

"No?" flashed Mack. "You and brother Carl have been rivals for the last two years. You've been out to beat each other on the gridiron and now that you've turned out some cracking good teams with the smallest college in the State, you think you've got my brother on the run!"

"I'm tickled, naturally," admitted the coach. "Wouldn't you be? Don't you suppose your brother enjoys his triumphs over me? ... It's all in a spirit of good sportsmanship!"

"That part of it may be all right," conceded Mack, "but you feel strong enough against my brother, just the same, to not want to give me a break!"

"That's bunk!" branded Coach Edward. "But there's one thing I've always wanted to know ... why is it you quit Pomeroy after two years and came to Grinnell?"

"That's an easy one to answer. I discovered I could never hope to make the team that my brother was coaching. He was bending over backward to keep from showing me any favors. When I found that out, I figured I'd better save him from any further embarrassment and give myself a fair chance by changing schools. That's why I came to Grinnell!"

"But why Grinnell—Pomeroy's bitterest rival? Of all the schools you might have picked...!"

Mack grinned, sardonically. "My brother didn't think I'd ever make a good football player. I'd hoped to be able to show him."

"That's just your greatest fault," spoke the coach, frankly. "You want the limelight every move you make. You're wondering all the time if everyone's looking at you ... and it's hurting your game. No good player can be thinking of starring and playing at the same time."

Mack stared hard for a moment.