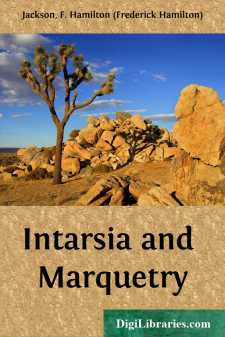 GENERAL PREFACE TO THE SERIES

If there is one quality which more than another marks the demand of the present day it is the requirement of novelty. In every direction the question which is asked is not, "Is this fresh thing good? Is it appropriate to, and well-fitted for, its intended uses?" but "Is it novel?" And the constant change of fashion sets a premium upon the satisfaction of this demand and enlists the commercial instinct on the side of perpetual change. While there are directions in which this desire is not altogether harmful, since at least many monstrosities offend our eyes but for a short time, a full compliance with it by the designer is likely to prove disastrous to his reputation, and recent phases in which an attempt has been made to throw aside as effete and outworn the forms which have gradually grown with the centuries, and to produce something entirely fresh and individual, have shown how impossible it is at this period of the world's history to dispense with tradition, and, escaping from the accumulated experience of the race, set forth with childlike naïveté. Careful study of these experiments discloses the fact that in as far as they are successful in proportion and line they approach the successes of previous generations, and that the undigested use of natural motifs results not in nourishment but in nightmare.

The object aimed at by this series of handbooks is the recall of the designer and craftsman to a saner view of what constitutes originality by setting before them something of the experience of past times, when craft tradition was still living and the designer had a closer contact with the material in which his design was carried out than is usual at present. Since both design and craftsmanship as known until the end of the 18th century were the outcome of centuries of experience of the use of material and of the endeavour to meet daily requirements, it may be justly called folly to cast all this aside as the fripperies of bygone fashion which cramp the efforts of the designer, and attempt to start afresh without a rag of clothing, even if it were possible. At the same time it is not intended to advocate the direct copyism of any style, whether regarded as good, bad, or indifferent. Some minds find inspiration in the contemplation of natural objects, while others find the same stimulus in the works of man. The fashion of present opinion lays great stress upon the former source of inspiration, and considers the latter heretical, while, with a strange inconsistency, acclaiming a form of design based upon unnatural contortions of growth, and a treatment which is often alien to the material. It is the hope of the author to assist the second class of mind to the rivalling of the ancient glories of design and craftsmanship, and perhaps even to convert some of those whose talents are at present wasted in the chase of the will-o'-the-wisp of fancied novelty and individuality. Much of what appears to the uneducated and ill-informed talent as new is really but the re-discovery of motifs which have been tried and abandoned by bygone masters as unsuitable, and a greater acquaintance with their triumphs is likely, one would hope, to lead students, whether designers or craftsmen, to view with disgust undigested designs indifferently executed which have little but a fancied novelty to recommend them.

It is intended that each volume shall contain an historical sketch of the phase of design and craft treated of, with examples of the successful overcoming of the difficulties to be encountered in its practice, workshop recipes, and the modes of producing the effects required, with a chapter upon the limitations imposed by the material and the various modes of evading those limitations adopted by those who have not frankly accepted them.

The subject treated of in this handbook has, until lately, received scant attention in England; and except for short notices of a general nature contained in such books as Waring's "Arts Connected with Architecture," technical descriptions, such as those in Holtzapffel's "Turning and Mechanical Manipulation," and a few fugitive papers, has not been treated in the English language....