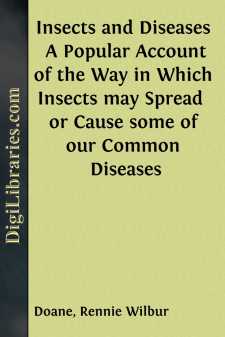 Add to My Favorites
Published: 8 years ago
Downloads: 53
Rating: (0 Votes)

CHAPTER I PARASITISM AND DISEASE

he dictionary says that a parasite is a living organism, either animal or plant, that lives in or on some other organism from which it derives its nourishment for a whole or part of its existence. This definition will serve as well as any, as it seems to include all the forms that might be classed as parasites. As a general thing, however, we are accustomed to think of a parasite as working more or less injury to its host, or perhaps we had better say that if it does not cause any irritation or ill effects its presence is not noted and we do not think of it at all.

As a matter of fact the number of parasitic organisms that are actually detrimental to the welfare of their hosts is comparatively small while the number of forms both large and small that lead parasitic lives in or on various hosts, usually doing no appreciable harm, often perhaps without the host being aware of their presence, is very great indeed.

Few of the higher animals live parasitic lives. The nearest approach to a true parasite among the vertebrates is the lamprey-eel () which attaches itself to the body of a fish and sucks the blood or eats the flesh. Among the Crustaceans, the group that includes the lobsters and crabs, we find many examples of parasites, the most extraordinary of which is the curious crab known as Sacculina (). In its early stages this creature is free-swimming and looks not unlike other young crabs. But it soon attaches itself to another crab and begins to live at the expense of its host. Then it commences to undergo remarkable changes and finally becomes a mere sac-like organ with a number of long slender root-like processes penetrating and taking nourishment from the body of the unfortunate crab-host.

The worms furnish many well-known examples of parasites, whole groups of them being especially adapted to parasitic life. The tapeworms, common in many animals and often occurring in man, the roundworms of which the trichina () that causes "measly" pork is a representative, are familiar examples. These and a host of others all show a very high degree of specialization fitting them for their peculiar lives in their hosts.

Fig. 2—Sacculina; A, parasite attached to a crab; B, the active larval condition; C, the adult removed from its host. (After Haeckel.)

Fig. 3—Trichina spiralis encysted in muscle of a pig. (From Kellogg's Elementary Zoöl.)

From among the insects may be selected interesting examples of almost all kinds and degrees of parasitism, temporary, permanent, external, internal (, , ). Among them is found, too, that curious condition known as hyperparasitism where one animal, itself a parasite, is preyed upon by a still smaller parasite.

Coming now to the minute, microscopic, one-celled animals, the Protozoa, we find entire groups of them that are living parasitic lives, depending wholly on one or more hosts for their existence. Many of these have a very remarkable life-history, living part of the time in one host, part in another. The malarial parasite and others that cause some of the diseases of man and domestic animals are among the most important of these.

Among all these parasites, from the highest to the lowest the process that has fitted them for a parasitic life has been one of degeneration. While they may be specialized to an extreme degree in one direction they are usually found to have some of the parts or organs, which in closely related forms are well developed, atrophied or entirely wanting....