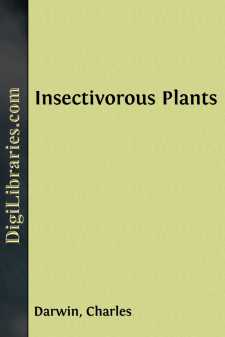 Enamel and Dentine.—As the secretion decalcified ordinary bone, I determined to try whether it would act on enamel and dentine, but did not expect that it would succeed with so hard a substance as enamel. Dr. Klein gave me some thin transverse slices of the canine tooth of a dog; small angular fragments of which were placed on four leaves; and these were examined each succeeding day at the same hour. The results are, I think, worth giving in detail.] [page 107]

[Experiment 1.—May 1st, fragment placed on leaf; 3rd, tentacles but little inflected, so a little saliva was added; 6th, as the tentacles were not strongly inflected, the fragment was transferred to another leaf, which acted at first slowly, but by the 9th closely embraced it. On the 11th this second leaf began to re-expand; the fragment was manifestly softened, and Dr. Klein reports, "a great deal of enamel and the greater part of the dentine decalcified."

Experiment 2.—May 1st, fragment placed on leaf; 2nd, tentacles fairly well inflected, with much secretion on the disc, and remained so until the 7th, when the leaf re-expanded. The fragment was now transferred to a fresh leaf, which next day (8th) was inflected in the strongest manner, and thus remained until the 11th, when it re-expanded. Dr. Klein reports, "a great deal of enamel and the greater part of the dentine decalcified."

Experiment 3.—May 1st, fragment moistened with saliva and placed on a leaf, which remained well inflected until 5th, when it re-expanded. The enamel was not at all, and the dentine only slightly, softened. The fragment was now transferred to a fresh leaf, which next morning (6th) was strongly inflected, and remained so until the 11th. The enamel and dentine both now somewhat softened; and Dr. Klein reports, "less than half the enamel, but the greater part of the dentine decalcified."

Experiment 4.—May 1st, a minute and thin bit of dentine, moistened with saliva, was placed on a leaf, which was soon inflected, and re-expanded on the 5th. The dentine had become as flexible as thin paper. It was then transferred to a fresh leaf, which next morning (6th) was strongly inflected, and reopened on the 10th. The decalcified dentine was now so tender that it was torn into shreds merely by the force of the re-expanding tentacles.]

From these experiments it appears that enamel is attacked by the secretion with more difficulty than dentine, as might have been expected from its extreme hardness; and both with more difficulty than ordinary bone. After the process of dissolution has once commenced, it is carried on with greater ease; this may be inferred from the leaves, to which the fragments were transferred, becoming in all four cases strongly inflected in the course of a single day; whereas the first set of leaves acted much less quickly and [page 108] energetically. The angles or projections of the fibrous basis of the enamel and dentine (except, perhaps, in No. 4, which could not be well observed) were not in the least rounded; and Dr. Klein remarks that their microscopical structure was not altered. But this could not have been expected, as the decalcification was not complete in the three specimens which were carefully examined.

Fibrous Basis of Bone.—I at first concluded, as already stated, that the secretion could not digest this substance. I therefore asked Dr. Burdon Sanderson to try bone, enamel, and dentine, in artificial gastric juice, and he found that they were after a considerable time completely dissolved....