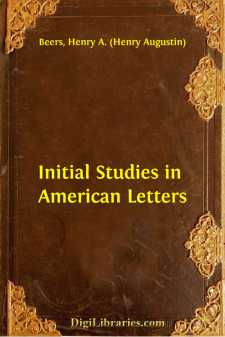 CHAPTER I. THE COLONIAL PERIOD.

The writings of our colonial era have a much greater importance as history than as literature. It would be unfair to judge of the intellectual vigor of the English colonists in America by the books that they wrote; those "stern men with empires in their brains" had more pressing work to do than the making of books. The first settlers, indeed, were brought face to face with strange and exciting conditions—the sea, the wilderness, the Indians, the flora and fauna of a new world—things which seem stimulating to the imagination, and incidents and experiences which might have lent themselves easily to poetry or romance. Of all these they wrote back to England reports which were faithful and sometimes vivid, but which, upon the whole, hardly rise into the region of literature. "New England," said Hawthorne, "was then in a state incomparably more picturesque than at present." But to a contemporary that old New England of the seventeenth century doubtless seemed any thing but picturesque, filled with grim, hard, work-day realities. The planters both of Virginia and Massachusetts were decimated by sickness and starvation, constantly threatened by Indian Wars, and troubled by quarrels among themselves and fears of disturbance from England. The wrangles between the royal governors and the House of Burgesses in the Old Dominion, and the theological squabbles in New England, which fill our colonial records, are petty and wearisome to read of. At least, they would be so did we not bear in mind to what imperial destinies those conflicts were slowly educating the little communities which had hardly yet secured a foothold on the edge of the raw continent.

Even a century and a half after the Jamestown and Plymouth settlements, when the American plantations had grown strong and flourishing, and commerce was building up large towns, and there were wealth and generous living and fine society, the "good old colony days when we lived under the king," had yielded little in the way of literature that is of any permanent interest. There would seem to be something in the relation of a colony to the mother-country which dooms the thought and art of the former to a helpless provincialism. Canada and Australia are great provinces, wealthier and more populous than the thirteen colonies at the time of their separation from England. They have cities whose inhabitants number hundreds of thousands, well-equipped universities, libraries, cathedrals, costly public buildings, all the outward appliances of an advanced civilization; and yet what have Canada and Australia contributed to British literature?

American literature had no infancy. That engaging naïveté and that heroic rudeness which give a charm to the early popular tales and songs of Europe find, of course, no counterpart on our soil. Instead of emerging from the twilight of the past the first American writings were produced under the garish noon of a modern and learned age. Decrepitude rather than youthfulness is the mark of a colonial literature....