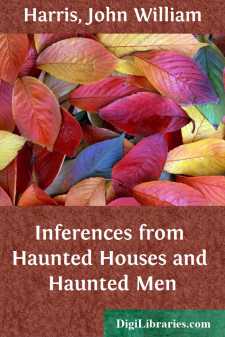 The lack of interest in so-called psychical matters is somewhat surprising.

There is, however, more hope of the clearing up of the scientific aspects of these phenomena than ever before.

Sir William Crookes, late President of the British Association, has no doubt that thoughts and images may be transferred from one mind to another without the agency of the recognised organs of sense, and that knowledge may enter the human mind without being communicated in any hitherto known or recognised ways! The word recognised is important; perhaps "not by the recognised action of the organs of sense," would be a better expression.

In the "Alleged Haunting of B—— House," p. 33, Miss Freer says: "Apparitions are really hallucinations or false impressions upon the senses, created so far as originated by any external cause, by other minds either in the body or out of the body, which are themselves invisible in the ordinary and physical sense of the term, and really acting through some means at present very imperfectly known." This would include hypnotism at a distance, but also perhaps spirits.

Dr. Gowers has recently (reported in the Lancet), in a speech at University College, pointed out the close connection of the optic and auditory nerves with regard to cases of deafness.

The young lady who, when an attempt at transferring the sight of a candle to her was made, heard the word candle or something like it, the first letter doubtful, shows that thought transfer is to the ear as well as to the eye, or at least goes over from one to the other; she says, "You know I as often hear the name of the object as see the thing itself." This may have been from a mental effort to receive distinctly an inefficiently acute impression of her friend's. She saw a jug seen by her friend, and heard the train she heard. The colour of the jug differed a little. The distance fourteen miles. Audible speech might thus be helped by despatching a picture of the idea from a distance. Other people must be like Miss Campbell.[1] There must be material force in this, since a thought heightens the temperature of the brain. But this force has its limits of distance, &c.

To connect apparitions with hypnotism.

In their case, and in so-called spiritual experiences (spiritistic is the better word), there is generally a preceding feeling like entering an icehouse.[2] This is described as occurring to the butler of the Haunted House at B——, Harold Sanders, in 1896; to Mr. "Endell," and to others. This chill is surely identical with, or very closely related to, the chill of hypnotism mentioned by Binet and Féré.[3] The balance of the circulation has been interfered with. They state that this is the only symptom by which any one can tell he has been hypnotised, and that this is not always present.

In continuous slight hypnotism, chills on part of the scalp, part of the shoulder, part of the face, or the ribs, etc., may be experienced; they are possibly signs of slackening hypnotic power....