Indians of the Yosemite Valley and Vicinity Their History, Customs and Traditions 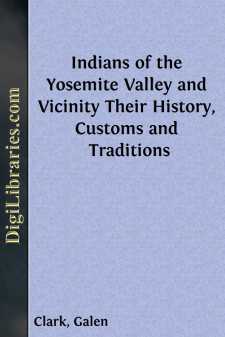 During the past few years a rapidly growing interest in the native Indians has been manifested by a large majority of visitors to the Yosemite Valley. They have evinced a great desire to see them in their rudely constructed summer camps, and to purchase some articles of their artistic basket and bead work, to take away as highly prized souvenirs.

They are also anxious to learn something of their former modes of life, habits and domestic industries, before their original tribal relations were ruthlessly broken up by the sudden advent of the white population of gold miners and others in 1850, and the subsequent war, in which the Indians were defeated, and, as a result, nearly exterminated.

ORIGIN OF THE YOSEMITE INDIANS.

According to statements made by Teneiya (Ten-eye´-ya) [see footnote] chief of the Yosemites, to Dr. L.H. Bunnell, and published by him in his book on the "Discovery of the Yosemite", the original Indian name of the Valley was Ah-wah´-nee, which has been translated as "deep grassy valley", and the Indians living there were called Ah-wah-nee´-chees, which signified "dwellers in Ah-wah´-nee."

Footnote: The Indian names are usually pronounced exactly as spelled, with each syllable distinctly sounded, and the principal accent on the penult, as in Ah-wah´-nee, or the antepenult, as in Yo-sem´-i-te. Where doubt might exist, the accent will be indicated, or the pronunciation given in parenthesis.

Transcriber's note: The remaining footnotes in the original text are, in the present edition, moved into the line of text and are marked by square brackets, thus: Ah-wah´-nee [Yosemite Valley].

Many years ago, the old chief said, the Ah-wah-nee´-chees had been a large and powerful tribe, but by reason of wars and a fatal black sickness, nearly all had been destroyed, and the survivors of the band fled from the Valley and joined other tribes.

Near the foot of these falls was located the village of Ah-wah´-nee, the Indian capital and residence of Chief Teneiya. There were eight other villages in the Valley.

For years afterwards this locality was uninhabited, but finally Teneiya, who claimed to be descended from an Ah-wah-nee´-chee chief, left the Mo´nos, where he had born and brought up, and, gathering of his father's old tribe around him, visited the Valley and claimed it as the birthright of his people. He then became the founder of a new tribe or band, which received the name "Yo-sem´-i-te." This word signifies a full-grown grizzly bear, and Teneiya said that the name had been given to his band because they occupied the mountains and valley which were the favorite resort of the grizzly bears, and his people were expert in killing them; that his tribe had adopted the name because those who had bestowed it were afraid of the grizzlies, and also feared his band.

The Yosemites were perhaps the most warlike of any of the tribes in this part of the Sierra Nevada Mountains, who were, as a rule, a peaceful people, dividing the territory among them, and indulging in few controversies. In fact, these Indians in general were less belligerent and warlike than any others on the Pacific Coast. When difficulties arose, they were usually settled peacefully by arbitration, in a grand council of the chiefs and head men of the tribes involved, without resorting to open hostilities.

Other bands of Indians in the vicinity of the Yosemite Valley were the Po-ho-nee´-chees who lived near the headwaters of the Po-ho´-no or Bridal Veil Creek in summer, and on the South Fork of the Merced´ River in winter, about twelve miles below Wawo´na; the Po-to-en´-cies, who lived on the Merced River; Wil-tuc-um´-nees, Tuol´-unme River; Noot´-choos and Chow-chil´-las, Chowchilla Valley; Ho-na´-ches and Me´-woos, Fresno River and vicinity; and Chook-chan´-ces, San Joaquin River and vicinity....