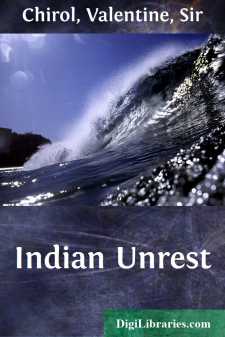 The volume into which Mr. Valentine Chirol has collected and republished his valuable series of articles in The Times upon Indian unrest is an important and very instructive contribution to the study of what is probably the most arduous problem in the politics of our far-reaching Empire. His comprehensive survey of the whole situation, the arrangement of evidence and array of facts, are not unlike what might have been found in the Report of a Commission appointed to investigate the causes and the state of affairs to which the troubles that have arisen in India may be ascribed.

At different times in the world's history the nations foremost in civilization have undertaken the enterprise of founding a great European dominion in Asia, and have accomplished it with signal success. The Macedonian Greeks led the way; they were followed by the Romans; and in both instances their military superiority and organizing genius enabled them to subdue and govern for centuries vast populations in Western Asia. European science and literature flourished in the great cities of the East, where the educated classes willingly accepted and supported foreign rulership as their barrier against a relapse into barbarism; nor have we reason for believing that it excited unusual discontent or disaffection among the Asiatic peoples. But the Greek and Roman Empires in Asia have disappeared long ago, leaving very little beyond scattered ruins; and in modern times it is the British dominion in India that has revived and is pursuing the enterprise of ruling and civilizing a great Asiatic population, of developing the political intelligence and transforming the ideas of an antique and, in some respects, a primitive society.

That the task must be one of prodigious difficulty, not always free from danger, has been long known to those who watched the experiment with some accurate foresight of the conditions attending it. Yet the recent symptoms of virulent disease in some parts of the body politic, though confined to certain provinces of India, have taken the British nation by surprise. Mr. Chirol's book has now exhibited the present state and prospect of the adventure; he has examined the causes and the consequences of the prevailing unrest; he has collected ample evidence, and he has consulted all the best authorities, Indian and European, on the subject. His masterly analysis of all this material shows wide acquaintance with the facts, and rare insight into the character and motives, the aims and methods, of those who are engaged in stirring up the spirit of revolt against the British Government. He has pointed to instances where the best intentions of the administrators have led them wrong; his whole narrative illustrates the perils that beset a Government necessarily pledged to moral and material reform, which finds its own principles perverted against its efforts, and its foremost opponents among the class that has been the first to profit by the benefits which that Government has conferred upon them....