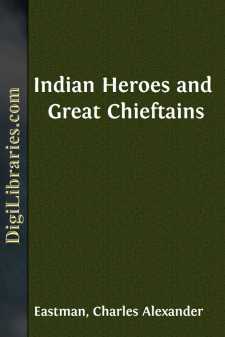 EVERY age, every race, has its leaders and heroes. There were over sixty distinct tribes of Indians on this continent, each of which boasted its notable men. The names and deeds of some of these men will live in American history, yet in the true sense they are unknown, because misunderstood. I should like to present some of the greatest chiefs of modern times in the light of the native character and ideals, believing that the American people will gladly do them tardy justice.

It is matter of history that the Sioux nation, to which I belong, was originally friendly to the Caucasian peoples which it met in succession-first, to the south the Spaniards; then the French, on the Mississippi River and along the Great Lakes; later the English, and finally the Americans. This powerful tribe then roamed over the whole extent of the Mississippi valley, between that river and the Rockies. Their usages and government united the various bands more closely than was the case with many of the neighboring tribes.

During the early part of the nineteenth century, chiefs such as Wabashaw, Redwing, and Little Six among the eastern Sioux, Conquering Bear, Man-Afraid-of-His-Horse, and Hump of the western bands, were the last of the old type. After these, we have a coterie of new leaders, products of the new conditions brought about by close contact with the conquering race.

This distinction must be borne in mind—that while the early chiefs were spokesmen and leaders in the simplest sense, possessing no real authority, those who headed their tribes during the transition period were more or less rulers and more or less politicians. It is a singular fact that many of the "chiefs", well known as such to the American public, were not chiefs at all according to the accepted usages of their tribesmen. Their prominence was simply the result of an abnormal situation, in which representatives of the United States Government made use of them for a definite purpose. In a few cases, where a chief met with a violent death, some ambitious man has taken advantage of the confusion to thrust himself upon the tribe and, perhaps with outside help, has succeeded in usurping the leadership.

Red Cloud was born about 1820 near the forks of the Platte River. He was one of a family of nine children whose father, an able and respected warrior, reared his son under the old Spartan regime. The young Red Cloud is said to have been a fine horseman, able to swim across the Missouri and Yellowstone rivers, of high bearing and unquestionable courage, yet invariably gentle and courteous in everyday life. This last trait, together with a singularly musical and agreeable voice, has always been characteristic of the man.

When he was about six years old, his father gave him a spirited colt, and said to him:

"My son, when you are able to sit quietly upon the back of this colt without saddle or bridle, I shall be glad, for the boy who can win a wild creature and learn to use it will as a man be able to win and rule men."

The little fellow, instead of going for advice and help to his grandfather, as most Indian boys would have done, began quietly to practice throwing the lariat....