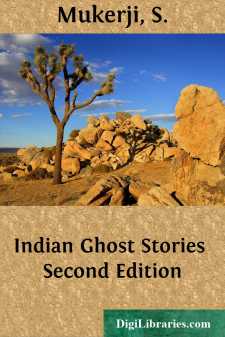 This story created a sensation when it was first told. It appeared in the papers and many big Physicists and Natural Philosophers were, at least so they thought, able to explain the phenomenon. I shall narrate the event and also tell the reader what explanation was given, and let him draw his own conclusions.

This was what happened.

A friend of mine, a clerk in the same office as myself, was an amateur photographer; let us call him Jones.

Jones had a half plate Sanderson camera with a Ross lens and a Thornton Picard behind lens shutter, with pneumatic release. The plate in question was a Wrattens ordinary, developed with Ilford Pyro Soda developer prepared at home. All these particulars I give for the benefit of the more technical reader.

Mr. Smith, another clerk in our office, invited Mr. Jones to take a likeness of his wife and sister-in-law.

This sister-in-law was the wife of Mr. Smith's elder brother, who was also a Government servant, then on leave. The idea of the photograph was of the sister-in-law.

Jones was a keen photographer himself. He had photographed every body in the office including the peons and sweepers, and had even supplied every sitter of his with copies of his handiwork. So he most willingly consented, and anxiously waited for the Sunday on which the photograph was to be taken.

Early on Sunday morning, Jones went to the Smiths'. The arrangement of light in the verandah was such that a photograph could only be taken after midday; and so he stayed there to breakfast.

At about one in the afternoon all arrangements were complete and the two ladies, Mrs. Smiths, were made to sit in two cane chairs and after long and careful focussing, and moving the camera about for an hour, Jones was satisfied at last and an exposure was made. Mr. Jones was sure that the plate was all right; and so, a second plate was not exposed although in the usual course of things this should have been done.

He wrapped up his things and went home promising to develop the plate the same night and bring a copy of the photograph the next day to the office.

The next day, which was a Monday, Jones came to the office very early, and I was the first person to meet him.

"I got the picture all right," said Jones, unwrapping an unmounted picture and handing it over to me "most funny, don't you think so?" "No, I don't ... I think it is all right, at any rate I did not expect anything better from you ...", I said.

"No," said Jones "the funny thing is that only two ladies sat ..." "Quite right," I said "the third stood in the middle."

"Then you imagined she was there, and there we find her ..." "I tell you, there were only two ladies there when I exposed" insisted Jones. He was looking awfully worried.

"Do you want me to believe that there were only two persons when the plate was exposed and three when it was developed?" I asked. "That is exactly what has happened," said Jones.

"Then it must be the most wonderful developer you used, or was it that this was the second exposure given to the same plate?"

"The developer is the one which I have been using for the last three years, and the plate, the one I charged on Saturday night out of a new box that I had purchased only on Saturday afternoon."

A number of other clerks had come up in the meantime, and were taking great interest in the picture and in Jones' statement.

It is only right that a description of the picture be given here for the benefit of the reader. I wish I could reproduce the original picture too, but that for certain reasons is impossible.

When the plate was actually exposed there were only two ladies, both of whom were sitting in cane chairs....