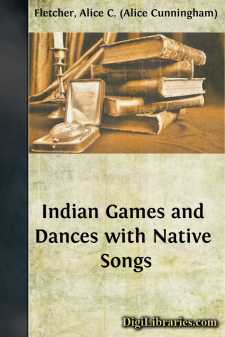 The adaptations from Indian ceremonies and sports here offered will enable those who take part in them to follow in happy mood some of the paths of expression that were opened long ago by thoughtful men and women as they lived, worked and played on this land in undisturbed intimacy with nature. Some of the thoughts bred of this intimacy find their expression in these dances and games, and it may help toward a better understanding of them and their spirit to tell briefly how the Indian looked upon and regarded his relation to nature.

The natives of America thought of the cosmos as a unit that was throbbing with the same life-force of which they were conscious within themselves; a force that gave to the rocks and hills their stable, unchanging character; to every living thing on land or water the power of growth and of movement; to man the ability to think, to will and to bring to pass. This universal and permeating life-force was always thought of as sacred, powerful, like a god. To it a name was given that varied in the different languages; in the Omaha tongue it was called Wakon'da. Through Wakon'da all things in nature were related and more or less interdependent, the sky, the earth, the animals and men. Nature was, in a sense, the manifestation of Wakon'da, consequently it was regarded as something more than the means by which physical life was sustained and became the religious and ethical instructor of man.

All food came from the earth; the wild fruits, the roots, the cultivated maize, these and the animals all derived their living power from Wakon'da and yielded their life to man that he might live and be strong. Therefore, the hunt was conducted with ceremonies in which the bounty of Wakon'da was formally recognized, and when food was eaten thanks were offered to this unseen power. The Indian lived in the open and watched with reverent attention the changing aspects of his environment. To him nothing was without significance, for all things were imbued with powers from Wakon'da and could convey lessons or admonitions to be heeded by the individual and by the people in their social life.

For example: the Indian noted the unfailing recurrence of day and night and that upon the regularity with which one followed the other all creatures relied, while man depended upon this constancy to carry out any given purpose. From thoughts upon this natural phenomenon and its effects on the actions of men, ideas arose that led the Indian to the conception of truth, that something, as between man and man, that can be depended on both in word and in deed. "Thus," the old men said, "Wakon'da taught us the necessity of truthfulness, if we would live peacefully together." Other natural aspects, as the storm, with its terrifying thunder and destructive lightning, and the passing of the clouds revealing the blue sky, when the birds renewed their song, seemed to picture to the Indian the devastation of war and the happiness of peace. Again, the tree, compacted of many parts, suggested how the tribe could be made to stand and become strong....