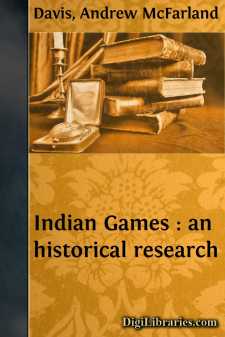 In 1667, Nicolas Perrot, then acting as agent of the French government, was received near Saut Sainte Marie with stately courtesy and formal ceremony by the Miamis, to whom he was deputed. A few days after his arrival, the chief of that nation gave him, as an entertainment, a game of lacrosse. [Footnote: Histoire de l'Amerique Septentrionale par M. de Bacqueville de la Potherie, Paris, 1722, Vol. II, 124, et seq.] "More than two thousand persons assembled in a great plain each with his cross. A wooden ball about the size of a tennis ball was tossed in the air. From that moment there was a constant movement of all these crosses which made a noise like that of arms which one hears during a battle. Half the savages tried to send the ball to the northwest the length of the field, the others wished to make it go to the southeast. The contest which lasted for a half hour was doubtful."

In 1763, an army of confederate nations, inspired by the subtle influence of Pontiac's master mind, formed the purpose of seizing the scattered forts held by the English along the northwestern frontier. On the fourth day of June of that year, the garrison at Fort Michilimackinac, unconscious of their impending fate, thoughtlessly lolled at the foot of the palisade and whiled away the day in watching the swaying fortunes of a game of ball which was being played by some Indians in front of the stockade. Alexander Henry, who was on the spot at the time, says that the game played by these Indians was "Baggatiway, called by the Canadians le jeu de la Crosse." [Footnote: Travels and Adventures in Canada, etc, by Alexander Henry, New York, 1809, p. 78, Travels through the Interior parts of North America, by Jonathan Carver, London, 1778, p. 19. The Book of the Indians, by Samuel G. Drake, Boston, 1811, Book V, Ch. III, p. 52.]

Parkman [Footnote: The Conspiracy of Pontiac, by Francis Parkman, Boston, 1870, Vol. 1, p. 339.] concludes a vivid description of the surprise and massacre of the garrison at Michilimackinac, based upon authentic facts, as follows: "Bushing and striking, tripping their adversaries, or hurling them to the ground, they pursued the animating contest amid the laughter and applause of the spectators. Suddenly, from the midst of the multitude, the ball soared into the air and, descending in a wide curve, fell near the pickets of the fort. This was no chance stroke. It was part of a preconcerted scheme to insure the surprise and destruction of the garrison. As if in pursuit of the ball, the players turned and came rushing, a maddened and tumultuous throng, towards the gate. In a moment they had reached it. The amazed English had no time to think or act. The shrill cries of the ball-players were changed to the ferocious war-whoop. The warriors snatched from the squaws the hatchets which the latter, with this design, had concealed beneath their blankets. Some of the Indians assailed the spectators without, while others rushed into the fort, and all was carnage and confusion."

Thus we see that the favorite game of ball of the North American Indians, known to-day, as it was in 1636, by the name of "lacrosse," was potent among them as a remedial exercise or superstitious rite to cure diseases and avert disaster; that it formed part of stately ceremonials which were intended to entertain and amuse distinguished guests; and that it was made use of as a stratagem of war, by means of which to lull the suspicions of the enemy and to gain access to their forts....