India: What can it teach us? A Course of Lectures Delivered before the University Of Cambridge 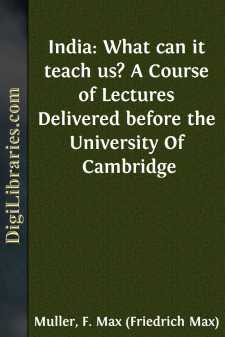 My dear Cowell: As these Lectures would never have been written or delivered but for your hearty encouragement, I hope you will now allow me to dedicate them to you, not only as a token of my sincere admiration of your great achievements as an Oriental scholar, but also as a memorial of our friendship, now more than thirty years old, a friendship which has grown from year to year, has weathered many a storm, and will last, I trust, for what to both of us may remain of our short passage from shore to shore.

I must add, however, that in dedicating these Lectures to you, I do not wish to throw upon you any responsibility for the views which I have put forward in them. I know that you do not agree with some of my views on the ancient religion and literature of India, and I am well aware that with regard to the recent date which I have assigned to the whole of what is commonly called the Classical Sanskrit Literature, I stand almost alone. No, if friendship can claim any voice in the courts of science and literature, let me assure you that I shall consider your outspoken criticism of my Lectures as the very best proof of your true and honest friendship. I have through life considered it the greatest honor if real scholars, I mean men not only of learning, but of judgment and character, have considered my writings worthy of a severe and searching criticism; and I have cared far more for the production of one single new fact, though it spoke against me, than for any amount of empty praise or empty abuse. Sincere devotion to his studies and an unswerving love of truth ought to furnish the true scholar with an armor impermeable to flattery or abuse, and with a visor that shuts out no ray of light, from whatever quarter it may come. More light, more truth, more facts, more combination of facts, these are his quest. And if in that quest he fails, as many have failed before him, he knows that in the search for truth failures are sometimes the condition of victory, and the true conquerors often those whom the world calls the vanquished.

You know better than anybody else the present state of Sanskrit scholarship. You know that at present and for some time to come Sanskrit scholarship means discovery and conquest. Every one of your own works marks a real advance, and a permanent occupation of new ground. But you know also how small a strip has as yet been explored of the vast continent of Sanskrit literature, and how much still remains terra incognita. No doubt this exploring work is troublesome, and often disappointing, but young students must learn the truth of a remark lately made by a distinguished member of the Indian Civil Service, whose death we all deplore, Dr. Burnell, "that no trouble is thrown away which saves trouble to others." We want men who will work hard, even at the risk of seeing their labors unrequited; we want strong and bold men who are not afraid of storms and shipwrecks. The worst sailors are not those who suffer shipwreck, but those who only dabble in puddles and are afraid of wetting their feet.

It is easy now to criticise the labors of Sir William Jones, Thomas Colebrooke, and Horace Hayman Wilson, but what would have become of Sanskrit scholarship if they had not rushed in where even now so many fear to tread? and what will become of Sanskrit scholarship if their conquests are forever to mark the limits of our knowledge? You know best that there is more to be discovered in Sanskrit literature than Nalas and Sakuntalâs, and surely the young men who every year go out to India are not deficient in the spirit of enterprise, or even of adventure?...