Inca Land Explorations in the Highlands of Peru 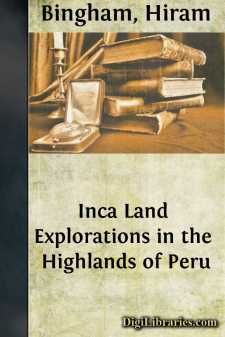 Chapter I Crossing the Desert

A kind friend in Bolivia once placed in my hands a copy of a most interesting book by the late E. George Squier, entitled “Peru. Travel and Exploration in the Land of the Incas.” In that volume is a marvelous picture of the Apurimac Valley. In the foreground is a delicate suspension bridge which commences at a tunnel in the face of a precipitous cliff and hangs in mid-air at great height above the swirling waters of the “great speaker.” In the distance, towering above a mass of stupendous mountains, is a magnificent snow-capped peak. The desire to see the Apurimac and experience the thrill of crossing that bridge decided me in favor of an overland journey to Lima.

As a result I went to Cuzco, the ancient capital of the mighty empire of the Incas, and was there urged by the Peruvian authorities to visit some newly re-discovered Inca ruins. As readers of “Across South America” will remember, these ruins were at Choqquequirau, an interesting place on top of a jungle-covered ridge several thousand feet above the roaring rapids of the great Apurimac. Page 2There was some doubt as to who had originally lived here. The prefect insisted that the ruins represented the residence of the Inca Manco and his sons, who had sought refuge from Pizarro and the Spanish conquerors of Peru in the Andes between the Apurimac and Urubamba rivers.

While Mr. Clarence L. Hay and I were on the slopes of Choqquequirau the clouds would occasionally break away and give us tantalizing glimpses of snow-covered mountains. There seemed to be an unknown region, “behind the Ranges,” which might contain great possibilities. Our guides could tell us nothing about it. Little was to be found in books. Perhaps Manco's capital was hidden there. For months afterwards the fascination of the unknown drew my thoughts to Choqquequirau and beyond. In the words of Kipling's “Explorer”:

“… a voice, as bad as Conscience, rang interminable changesOn one everlasting Whisper day and night repeated—so:‘Something hidden. Go and find it. Go and look behind the Ranges—Something lost behind the Ranges. Lost and waiting for you. Go!’ ”

To add to my unrest, during the following summer I read Bandelier's “Titicaca and Koati,” which had just appeared. In one of the interesting footnotes was this startling remark: “It is much to be desired that the elevation of the most prominent peaks of the western or coast range of Peru be accurately determined. It is likely … that Coropuna, in the Peruvian coast range of the Department Arequipa, is the culminating point of the continent. It Page 3exceeds 23,000 feet in height, whereas Aconcagua [conceded to be the highest peak in the Western Hemisphere] is but 22,763 feet (6940 meters) above sea level.” His estimate was based on a survey made by the civil engineers of the Southern Railways of Peru, using a section of the railroad as a base. My sensations when I read this are difficult to describe. Although I had been studying South American history and geography for more than ten years, I did not remember ever to have heard of Coropuna....