In Wicklow and West Kerry 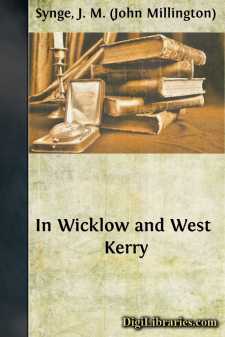 The Vagrants of Wicklow

Some features of County Wicklow, such as the position of the principal workhouses and holiday places on either side of the coach road from Arklow to Bray, have made this district a favourite with the vagrants of Ireland. A few of these people have been on the roads for generations; but fairly often they seem to have merely drifted out from the ordinary people of the villages, and do not differ greatly from the class they come from. Their abundance has often been regretted; yet in one sense it is an interesting sign, for wherever the labourer of a country has preserved his vitality, and begets an occasional temperament of distinction, a certain number of vagrants are to be looked for. In the middle classes the gifted son of a family is always the poorest—usually a writer or artist with no sense for speculation—and in a family of peasants, where the average comfort is just over penury, the gifted son sinks also, and is soon a tramp on the roadside.

In this life, however, there are many privileges. The tramp in Ireland is little troubled by the laws, and lives in out-of-door conditions that keep him in good-humour and fine bodily health. This is so apparent, in Wicklow at least, that these men rarely seek for charity on any plea of ill-health, but ask simply, when they beg: 'Would you help a poor fellow along the road?' or, 'Would you give me the price of a night's lodging, for I'm after walking a great way since the sun rose?'

The healthiness of this life, again, often causes people to live to a great age, though it is not always easy to test the stories that are told of their longevity. One man, however, who died not long ago, claimed to have reached one hundred and two with a show of likelihood; for several old people remember his first appearance in a certain district as a man of middle age, about the year of the Famine, in 1847 or 1848. This man could hardly be classed with ordinary tramps, for he was married several times in different parts of the world, and reared children of whom he seemed to have forgotten, in his old age, even the names and sex. In his early life he spent thirty years at sea, where he sailed with some one he spoke of afterwards as 'Il mio capitane,' visiting India and Japan, and gaining odd words and intonations that gave colour to his language. When he was too old to wander in the world, he learned all the paths of Wicklow, and till the end of his life he could go the thirty miles from Dublin to the Seven Churches without, as he said, 'putting out his foot on a white road, or seeing any Christian but the hares and moon.' When he was over ninety he married an old woman of eighty-five. Before many days, however, they quarrelled so fiercely that he beat her with his stick, and came out again on the roads. In a few hours he was arrested at her complaint, and sentenced to a month in Kuilmainham. He cared nothing for the plank-bed and uncomfortable diet; but he always gathered himself together, and cursed with extraordinary rage, as he told how they had cut off the white hair which had grown down upon his shoulders....