In Time of Emergency A Citizen's Handbook on Nuclear Attack, Natural Disasters (1968) 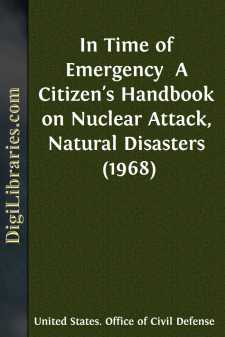 A major emergency affecting a large number of people may occur anytime and anywhere.

It may be a peacetime disaster such as a flood, tornado, fire, hurricane, blizzard or earthquake. It could be an enemy nuclear attack on the United States.

In any type of general disaster, lives can be saved if people are prepared for the emergency, and know what actions to take when it occurs.

With the aid of Federal and State governments, cities and counties in all parts of the country are developing their local civil defense systems--the fallout shelters, supporting equipment and emergency plans needed to reduce the loss of life from an enemy attack.

While these local government systems have been set up mainly as safeguards against nuclear attack, they have saved lives and relieved suffering in many major peacetime disasters. People have been warned of impending storms and similar dangers, told how to protect themselves, sheltered from the elements, fed and clothed, treated for injury and illness, and given help in resuming their normal lives. Experience has shown that as cities, counties and towns develop their systems to preserve life under nuclear attack conditions, they also become better prepared to deal effectively with peacetime disasters.

In cooperation with the U.S. Office of Civil Defense and the States, many local governments are improving their civil defense systems by preparing community shelter plans. These plans include instructions to local citizens on what to do in the event of nuclear attack.

Part I (pages -) is concerned with nuclear attack and basic actions to take.

In addition to following the advice given in this handbook and the instructions of their local governments, people can prepare themselves better to meet any major disaster by taking training courses to develop their "emergency skills." Especially recommended are these courses:

"PERSONAL AND FAMILY SURVIVAL" (12-hour course)--A basic orientation course in civil defense, which also tells people how to improve their protection against the effects of a nuclear attack.

"MEDICAL SELF-HELP" (16-hour course)--How to care for the sick and injured if a doctor or nurse is not available.

"FIRST AID" (courses of various lengths)--How to help the sick and injured until professional medical assistance is obtained.

"CARE OF THE SICK AND INJURED" (12-hour course)--How to care for patients after they have received professional medical treatment.

Information on these free courses, which are given in most communities, is available from local Civil Defense Offices, County Agricultural Extension Agents, local public health departments, or American Red Cross chapters. Special advice for rural families on emergency actions related to crops and livestock is available from the U.S. Department of Agriculture.

A nuclear attack against the United States would take a high toll of lives. But our losses would be much less if people were prepared to meet the emergency, knew what actions to take, and took them.

A nationwide civil defense system now exists in the United States, and is being enlarged and improved constantly. The heart of this system is fallout shelter to protect people from the radioactive fallout that would result from a nuclear attack. The system also includes warning and communications networks, preparations to measure fallout radiation, control centers to direct lifesaving and recovery operations, emergency broadcasting stations, local governments organized for emergency operations, large numbers of citizens trained in emergency skills, and U.S. military forces available to help civil authorities and the public in a time of emergency.

If an enemy should threaten to attack the United States, you would not be alone. The entire Nation would be mobilizing to repulse the attack, destroy the enemy, and hold down our own loss of life. Much assistance would be available to you--from local, State and Federal governments, from the U.S. armed forces units in your area, and from your neighbors and fellow-Americans. If an attack should come, many lives would be saved through effective emergency preparations and actions.

You can give yourself and your family a much better chance of surviving and recovering from a nuclear attack if you will take time now to:

Understand the dangers you would face in an attack....