In the Wilds of Africa 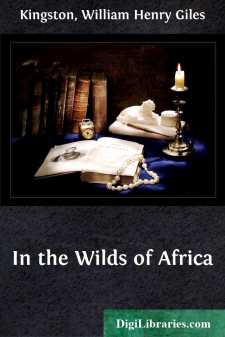 On Board the “Osprey”—Off the Coast of Africa.

A dense mist hung over the ocean; the sky above our heads was of a grey tint; the water below our feet of the colour of lead. Not a ripple disturbed its mirror-like surface, except when now and then a covey of flying fish leaped forth to escape from their pursuers, or it was clove by the fin of a marauding shark. We knew that we were not far off the coast of Africa, some few degrees to the south of the Equator; but how near we were we could not tell, for the calm had continued for several days, and a strong current, setting to the eastward, had been rapidly drifting us toward the shore.

Notwithstanding that the sun was obscured, his rays found means of heating the atmosphere, so that we felt much as if we were surrounded by a hot damp blanket.

I had already made a trip to the West Indies, and two to this terrible coast; and as I had escaped without an attack of yellow fever, or cholera, when the Liverpool owners of the brig Osprey—commanded by Captain Page, an old African trader—offered me a berth as supercargo, I willingly accepted it. We were bound out to the Cape of Good Hope, but had arranged to touch at two or three places on the coast, to trade and land passengers. Among other places we were to call at Saint Paul de Loando, to land a Portuguese gentleman, Senhor Silva, and his black servant Ramaon. Our object in trading was to obtain palm-oil, bees’-wax, gold dust, and ivory, in exchange for Manchester and Birmingham goods; and for this purpose we had already visited several places on the coast, picking up such quantities as could be obtained at each of them. We had not, however, escaped without the usual penalty African traders have to pay—two of our men having died of fever, and two others, besides the captain, being sick of it. The first mate, Giles Gritton, and another man, had been washed overboard in a heavy gale we encountered on the other side of the Equator, and we were now, therefore, somewhat short-handed. The first mate was a great loss, for he was an excellent seaman and a first-rate fellow, which is more than could be said of the second mate, Simon Kydd. How he came to be appointed mate seemed unaccountable; unless, as he was related to the owners, interest might have obtained for him what his own merits certainly would not. Taking him at his own value, he had few superiors, if any equals.

I felt much for Captain Page. He took the loss of his first mate greatly to heart, and thus the incapacity of the second contributed considerably to increase his malady. Day after day he grew worse, and I began to fear much that his illness would end fatally. He was as good and kind a man as ever lived, and an excellent sailor.

I had not been knocking about the ocean altogether with my eyes shut, and had managed to pick up a fair amount of nautical knowledge. I did not intrude it unnecessarily; I had a notion that I was regarded with a somewhat jealous eye by those who considered me a mere landsman. I certainly understood more about navigation than Mr Kydd, but that is not saying much....