In the Wars of the Roses A Story for the Young 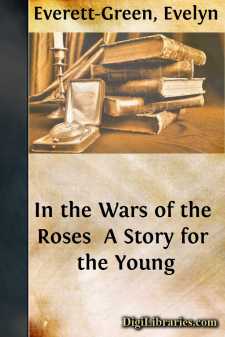 Chapter 1: A Brush With The Robbers.

This cry, growing feebler at each repetition, was borne by the evening breeze to the ears of a traveller who was picking his way along the dark mazes of Epping Forest one cool, fresh October day. Instinctively he drew rein and listened, laying his band unconsciously upon the hilt of his poniard.

"A woman's voice," he said half aloud, as he spurred more rapidly onward in the direction whence the cry proceeded. "A woman set upon, no doubt, by some band of these marauders who are desolating the country and disgracing humanity. Cowards! I wonder how many of them there are? A solitary traveller has not much chance against a gang of them; but at least I can sell my life dear. I have little enough to live for now; and it would be a stain for ever upon my father's fame were I to pass by unheeding the cry of a damsel in distress.

"Forward, then, good Sultan; there is work for both of us before we can think of food or lodging after our weary day of travel. Forward, good horse."

The coal-black charger, who, despite his jaded air and look of neglect, had evidently come of a good stock, and had both blood and mettle of the true soldier sort in him, pricked his ears, arched his neck, and appeared to be fully aware of what was required of him by his loved master. He broke into a gentle canter, and despite the roughness of the ground, maintained that pace for several hundred yards, until the hand of the traveller upon his rein warned him to moderate his pace.

The shades of evening were falling fast, but a young moon rode high in the sky, and helped to light up the expanse of broken ground and piled-up tree trunks which suddenly became visible to the traveller as he reached a clearing in the forest, through which the rough trail or path he was pursuing led. And here in this clearing he came upon the object of his search, and saw that his surmise as to the cause of the cries he had heard was only too correct. Four big burly men, all armed with the weapons of the day--bills, maces, and even the handgun, which was beginning to find a place amongst the more time-honoured arms of offence and defence--were surrounding the struggling figure of a woman, a young woman the traveller fancied, from her slimness and the cat-like agility which she displayed in struggling with her captors.

It appeared as if the men did not desire to hurt her if they could avoid doing so, but rather wished to make of her a prisoner; whilst she was making the most frantic efforts to escape from their restraining hands, and was uttering strangled cries for help, which were so deadened by the thick folds of the heavy driving cloak, which had been wrapped about her head, as to be barely audible even at a short distance.

"Let her fight and struggle," said a tall, broad-shouldered man with a darkly sinister face, who stood a little apart all this while, keeping, however, a very close watch upon the group. "She will soon tire herself out, and then we can carry her away peacefully. Don't hurt her....