In the Sweet Dry and Dry 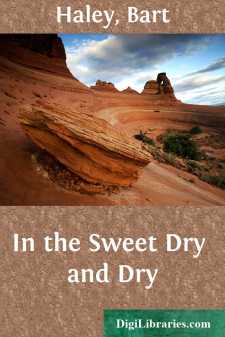 CHAPTER I MYSTERY OF THE UNEXPECTED JULEP

Dunraven Bleak, the managing editor of The Evening Balloon, sat at his desk in the center of the local-room, under a furious cone of electric light. It was six o'clock of a warm summer afternoon: he was filling his pipe and turning over the pages of the Final edition of the paper, which had just come up from the press-room. After the turmoil of the day the room had quieted, most of the reporters had left, and the shaded lamps shone upon empty tables and a floor strewn ankle-deep with papers. Nearby sat the city editor, checking over the list of assignments for the next morning. From an adjoining kennel issued occasional deep groans and a strong whiff of savage shag tobacco, blown outward by the droning gust of an electric fan. These proved that the cartoonist (a man whose sprightly drawings were born to an obbligato of vehement blasphemy) was at work within.

Mr. Bleak was just beginning to recuperate from the incessant vigilance of the day's work. There was an unconscious pathos in his lean, desiccated figure as he rose and crossed the room to the green glass drinking-fountain. After the custom of experienced newspapermen, he rapidly twirled a makeshift cup out of a sheet of copy paper. He poured himself a draught of clear but rather tepid water, and drank it without noticeable relish. His lifted head betrayed only the automatic thankfulness of the domestic fowl. There had been a time when six o'clock meant something better than a paper goblet of lukewarm filtration.

He sat down at his desk again. He had loaded his pipe sedulously with an extra fine blend which he kept in his desk drawer for smoking during rare moments of relaxation when he had leisure to savor it. As he reached for a match he was meditating a genial remark to the city editor, when he discovered that there was only one tandsticker in the box. He struck it, and the blazing head flew off upon the cream-colored thigh of his Palm Beach suit. His naturally placid temper, undermined by thirty years of newspaper work and two years of prohibition, flamed up also. With a loud scream of rage and a curse against Sweden, he leaped to his feet and shook the glowing cinder from his person. Facing him he found a stranger who had entered the room quietly and unobserved.

This was a huge man, clad in a sober uniform of gray cloth, with silver buttons and silver braid. A Sam Browne belt of wide blue leather marched across his extensive diagonal in a gentle curve. The band of his vizored military cap showed the initials C.P.H. in silver embroidery. His face, broad and clean-shaven, shone with a lustre which was partly warmth and partly simple friendliness. Save for a certain humility of bearing, he might have been taken for the liveried door-man of a moving-picture theater or exclusive millinery shop.

In one hand he carried a very large black leather suit-case.

"Is this Mr. Bleak?" he asked politely.

"Yes," said the editor, in surprise. His secret surmise was that some one had died and left him a legacy which would enable him to retire from newspaper work....