In the Roaring Fifties 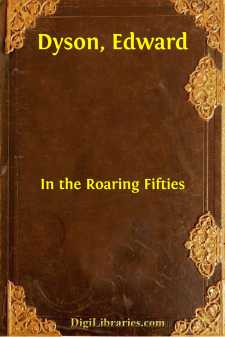 THE night was bright and cool, and the old East Indiaman moved slowly on the heaving bosom of the ocean, under a strong full moon, like a wind-blown ghost to whose wanderings there had been no beginning and could be no end—so small, so helpless she seemed between the two infinities of sea and sky. There was no cloud to break the blue profundity of heaven, no line of horizon, no diversity in the long lazy roll of the green waters to dispel the illusion of an interminable ocean. The great crestless waves rose and fell with pulsing monotony, round, smooth and intolerably silent. It was as if the undulating sea had been stricken motionless, and the ship was damned to the Sisyphean task of surmounting one mysterious hill that eternally reappeared under her prow, and beyond which she might never pass. Suddenly the ghost faltered on the crest of a wave, fluttering her rags in the moonlight, possessed with a vague indecision. Shouting and the noise of hurrying feet broke the silence. There was a startling upheaval of men; they swarmed in the rigging, and faces were piled above the larboard bulwarks. A boat dropped from the ship's side, striking the sea with a muffled sound, and was instantly caught into the quaint lifting and falling motion of the Francis Cadman, as the oily-backed waves slid under. Four men in the boat bent smartly to the oars, a fifth stood erect in the prow, peering under his hand over the waste of waters; another at the tiller encouraged the rowers with cordial and well-meant abuse. A hundred people shouted futile directions from the ship. The gravity of the Indian Ocean was disturbed by the babble of dialects. One voice rose above all the rest, sonorous, masterful, cursing the ship into order with a deliberate flow of invective that had the dignity and force of a judgment.

The boat drew off rapidly. The men, squarely and firmly seated, bent their heavy shoulders with machine-like movements, and when they threw back their faces the rays of the moon glittered and flashed in their dilated eyes and on their bared teeth. The sailor at the tiller swayed in unison, and grunted encouragement, breaking every now and then into bitter speech, spoken as if in reverent accord with the night and their mission, in a low, pleading tone, much as a patient mother might address a wayward child.

'Lift her, lads—lift her, blast you! Oh, my blighted soul, Ellis! I'd get more square-pullin' out of a starved cat with ten kittens—I would, by thunder! Now, men, all together! Huh! Huh! hub!'

The boatswain strained as if tugging a stubborn oar. In the interval of silence that followed all bent attentive ears, but no call came from the sea. The sleek oars dipped into the waves without a sound, and swung noiselessly in the worn rowlocks. The man at the prow remained rigid as a statue, and Coleman resumed his whispered invocation.

'Bend to it, you devils! One! two! three! Morton, don't go to sleep, you swine! Ryan! Tadvers, you herrin'-gutted, boss-eyed son of a barber's ape, are you rowin' or spoonin' up hot soup?...