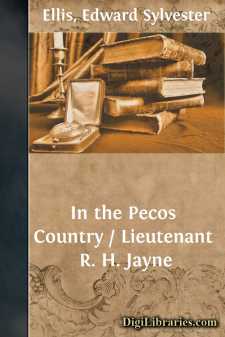 CHAPTER I. A WARNING

In the valley of the Rio Pecos, years ago, an attempt at founding a settlement was made by a number of hardy and daring New Englanders, whose leader was a sort of Don Quixote, who traveled hundreds of miles, passing by the richest land, the most balmy climate, where all were protected by the strong arm of law, for the sake of locating where the soil was only moderate, the climate no better, and where, it may be said, the great American government was as powerless to protect its citizens as was a child itself. The Rio Pecos, running through New Mexico and Texas, drains a territory which at that time was one of the most dangerous in the whole Indian country; and why these score or more of families should have hit upon this spot of all others, was a problem which could never be clearly solved.

The head man, Caleb Barnwell, had some odd socialistic theories, which, antedating as they did the theories of Bellamy, were not likely to thrive very well upon New England soil, and he pursuaded his friends to go with him, under the belief that the spot selected was one where they would have full opportunity to increase and multiply, as did the Mormons during their early days at Salt Lake. Then, too, there was some reason to suspect that rumors had reached the ears of Barnwell of the existence of gold and silver along this river, and it was said that he had hinted as much to those whom he believed he could trust. Be that as it may, the score of families reached the valley of the Upper Pecos in due time, and the settlement was begun and duly christened New Boston.

"How long do yer s'pose you folks are goin' to stay yer? Why, just long enough for Lone Wolf to hear tell that you've arriv, and he'll down here and clear you out quicker'n lightning."

This was the characteristic observation made by the old scout, hunter and guide, Sut Simpson, as he reined up his mustang to chat awhile with the new-comers, whom he looked upon as the greatest lunk-heads that he had ever encountered in all of his rather eventful experience. He had never seen them before; but he did not care for that, as he had the frankness of a frontiersman and never stood upon ceremony in the slightest degree.

"Did you ever hear tell of Lone Wolf?" he continued, as a group, including nearly the entire population, gathered about the veteran of the plains. "I say, war any of you ever introduced to that American gentleman?"

He looked around, from face to face, but no one responded. Whenever he fixed his eye upon any individual, that one shook his head to signify that he knew nothing of the Apache chief whose name he had just mentioned.

"What I meant to say," he continued, "is that any of you have got any yearnin' toward Lone Wolf, feeling as if your heart would break if you did n't get a chance to throw your arms about him, why, you need n't feel bad, 'cause you'll get the chance."

There was a significance in these words which made it plain to every one of those who were looking up in the scarred face of the hunter....