In the Heart of Africa 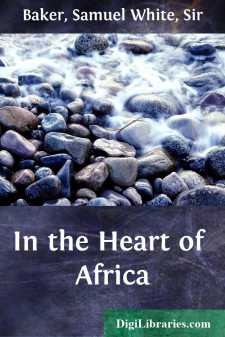 In March, 1861, I commenced an expedition to discover the sources of the Nile, with the hope of meeting the East African expedition of Captains Speke and Grant, that had been sent by the English Government from the South via Zanzibar, for the same object. I had not the presumption to publish my intention, as the sources of the Nile had hitherto defied all explorers, but I had inwardly determined to accomplish this difficult task or to die in the attempt. From my youth I had been inured to hardships and endurance in wild sports in tropical climates, and when I gazed upon the map of Africa I had a wild hope, mingled with humility, that, even as the insignificant worm bores through the hardest oak, I might by perseverance reach the heart of Africa.

I could not conceive that anything in this world has power to resist a determined will, so long as health and life remain. The failure of every former attempt to reach the Nile source did not astonish me, as the expeditions had consisted of parties, which, when difficulties occur, generally end in difference of opinion and in retreat; I therefore determined to proceed alone, trusting in the guidance of a Divine Providence and the good fortune that sometimes attends a tenacity of purpose. I weighed carefully the chances of the undertaking. Before me, untrodden Africa; against me, the obstacles that had defeated the world since its creation; on my side, a somewhat tough constitution, perfect independence, a long experience in savage life, and both time and means, which I intended to devote to the object without limit.

England had never sent an expedition to the Nile sources previous to that under the command of Speke and Grant. Bruce, ninety years before, had succeeded in tracing the source of the Blue or Lesser Nile; thus the honor of that discovery belonged to Great Britain. Speke was on his road from the South, and I felt confident that my gallant friend would leave his bones upon the path rather than submit to failure. I trusted that England would not be beaten, and although I hardly dared to hope that I could succeed where others greater than I had failed, I determined to sacrifice all in the attempt.

Had I been alone, it would have been no hard lot to die upon the untrodden path before me; but there was one who, although my greatest comfort, was also my greatest care, one whose life yet dawned at so early an age that womanhood was still a future. I shuddered at the prospect for her, should she be left alone in savage lands at my death; and gladly would I have left her in the luxuries of home instead of exposing her to the miseries of Africa. It was in vain that I implored her to remain, and that I painted the difficulties and perils still blacker than I supposed they really would be. She was resolved, with woman's constancy and devotion, to share all dangers and to follow me through each rough footstep of the wild life before me....