In the Eastern Seas 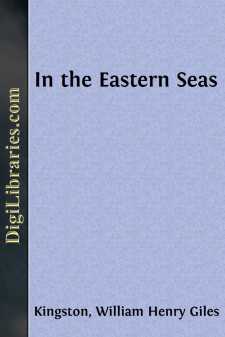 “Well, Thudicumb, I hope by noon we may at last get a glimpse of the sun,” said Captain Davenport to his first officer, as they walked the deck of the Bussorah Merchant, homeward bound from the East Indies, and at that time rolling on over the long heaving seas of the Atlantic. The sky was overcast, but ever and anon a gleam of light burst forth amid the clouds, playing on the foaming crest of a wave. It was blowing hard, but had evidently been blowing much harder, of which fact the condition of the Indiaman gave evidence. A portion of the starboard bulwarks were stove in, one of her quarter boats was shattered, and other slight damages were visible.

“We must be ready for him, sir, at all events,” said the first officer, looking at his watch. “It is not far off noon now.”

“Tell Oliver to bring me my sextant,” said the captain, as the mate descended from the poop into his cabin.

Mr Thudicumb soon returned, bringing his own instrument, and followed by a boy with the captain’s. Continuing their walk, they looked anxiously every now and then at the spot in the heavens where they expected the sun to appear. They were accompanied by one who seemed to take as much interest as they did in what was going forward. When they turned, he turned; when they looked up at the sky, he looked up also; balancing himself when the ship rolled as they did, by leaning over to the opposite direction to which she was heeling. He, however, could not have afforded them any assistance in their observation, for though his eye and the expression of his countenance exhibited much sagacity, he was of the canine species—a large dog—a magnificent-looking fellow, who could, the crew declared, for he was a great favourite with them, do everything but talk—and, they might have added, take a meridional observation, or a lunar.

Mr Thudicumb again looked at his watch. “There he is, sir,” he exclaimed at length.

He and the captain stopped in their walk; their sextants were quickly at their eyes; and there they stood, their feet planted firmly on the heaving deck, in an attitude long practice alone could have enabled them to maintain. A clear space was seen in the sky, increasing rapidly, and yet not altogether blue, but the vapour which drove across it was not sufficiently thick to prevent the sun’s rays descending upon the sea.

“She has dipped, sir,” said the first officer.

“She has,” observed the captain.

The sun’s elevation was read off on the index, and the instruments were returned to their cases. The calculation was very quickly worked out on a scrap of card.

“Make it noon, Mr Thudicumb,” said the captain, as, returning the case to the young cabin-boy, he directed him to take it below. While the captain and his first officer were making their observation, a group of midshipmen had collected on the deck with their quadrants in their hands, doing their best to shoot the sun, but their less experienced eyes could make but little of it in that heavy sea; and when they came to read off their observations, they were somewhat surprised at the wonderful difference which existed among them....