In the Days of Chivalry 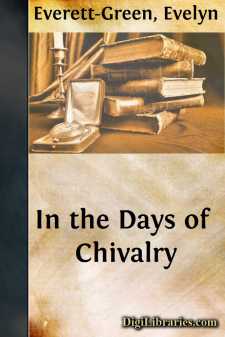 CHAPTER I. THE TWIN EAGLETS.

Autumn was upon the world -- the warm and gorgeous autumn of the south -- autumn that turned the leaves upon the trees to every hue of russet, scarlet, and gold, that transformed the dark solemn aisles of the trackless forests of Gascony into what might well have been palaces of fairy beauty, and covered the ground with a thick and soundless carpet of almost every hue of the rainbow.

The sun still retained much of its heat and power, and came slanting in between the huge trunks of the forest trees in broad shafts of quivering light. Overhead the soft wind from the west made a ceaseless, dreamy music and here and there the solemn silence of the forest was broken by the sweet note of some singing bird or the harsh croak of the raven. At night the savage cry of the wolf too often disturbed the rest of the scattered dwellers in that vast forest, and made a belated traveller look well to the sharpness of his weapons and the temper of his bowstring; but by day and in the sunlight the forest was beautiful and quiet enough -- something too quiet, perhaps, for the taste of the two handsome lads who were pacing the dim aisles together, their arms entwined and their curly heads in close proximity as they walked and talked.

The two lads were of exactly the same height, and bore a strong likeness one to the other. Their features were almost identical, but the colouring was different, so that no one who saw them in a good light would be likely to mistake or confuse them. Both had the oval face and delicate regular features which we English sometimes call "foreign-looking;" but then again they both possessed the broad shoulders, the noble height, the erect carriage, and frank, fearless bearing which has in it something distinctively English, and which had distinguished these lads from their infancy from the children of the country of their adoption. Then, though Raymond had the dark, liquid eyes of the south, Gaston's were as blue as the summer skies; and again, whilst Gaston's cheek was of a swarthy hue, Raymond's was as fair as that of an English maiden; and both had some golden gleams in their curly brown hair --- hair that clustered round their heads in a thick, waving mass, and gave a leonine look to the bold, eager faces. "The lion cubs" had been one of the many nicknames given to the brothers by the people round, who loved them, yet felt that they would not always keep them in their quiet forest. "The twin eaglets" was another such name; and truly there was something of the keen wildness of the eagle's eye in the flashing blue eyes of Gaston. The eager, delicate features and the slightly aquiline noses of the pair added, perhaps, to this resemblance; and there had been many whispers of late to the effect that the eaglets would not remain long in the nest now, but would spread their wings for a wider flight.

Born and bred though they had been at the mill in the great forest that covered almost the whole of the district of Sauveterre, they were no true children of the mill....