In the Amazon Jungle Adventures in Remote Parts of the Upper Amazon River, Including a Sojourn Among Cannibal Indians 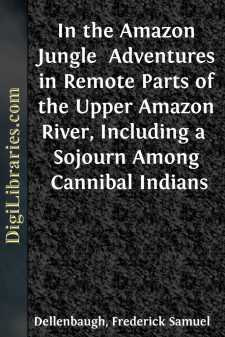 When Mr. Algot Lange told me he was going to the headwaters of the Amazon, I was particularly interested because once, years ago, I had turned my own mind in that direction with considerable longing. I knew he would encounter many set-backs, but I never would have predicted the adventures he actually passed through alive.

He started in fine spirits: buoyant, strong, vigorous. When I saw him again in New York, a year or so later, on his return, he was an emaciated fever-wreck, placing one foot before the other only with much exertion and indeed barely able to hold himself erect. A few weeks in the hospital, followed by a daily diet of quinine, improved his condition, but after months he had scarcely arrived at his previous excellent physical state.

Many explorers have had experiences similar to those related in this volume, but, at least so far as the fever and the cannibals are concerned, they have seldom survived to tell of them. Their interviews with cannibals have been generally too painfully confined to internal affairs to be available in this world for authorship, whereas Mr. Lange, happily, avoided not only a calamitous intimacy, but was even permitted to view the culinary preparations relating to the absorption of less favoured individuals, and himself could have joined the feast, had he possessed the stomach for it.

These good friends of his, the Mangeromas, conserved his life when they found him almost dying, not, strange as it may appear, for selfish banqueting purposes, but merely that he might return to his own people. It seems rather paradoxical that they should have loved one stranger so well as to spare him with suspicious kindness, and love others to the extent of making them into table delicacies. The explanation probably is that these Mangeromas were the reverse of a certain foreign youth with only a small stock of English, who, on being offered in New York a fruit he had never seen before, replied, "Thank you, I eat only my acquaintances"—the Mangeromas eat only their enemies.

Mr. Lange's account of his stay with these people, of their weapons, habits, form of battle, and method of cooking the human captives, etc., forms one of the specially interesting parts of the book, and is at the same time a valuable contribution to the ethnology of the western Amazon (or Marañon) region, where dwell numerous similar tribes little known to the white man. Particularly notable is his description of the wonderful wourahli (urari) poison, its extraordinary effect, and the modus operandi of its making; a poison used extensively by Amazonian tribes but not made by all. He describes also the bows and arrows, the war-clubs, and the very scientific weapon, the blow-gun. He was fortunate in securing a photograph of a Mangeroma in the act of shooting this gun. Special skill, of course, is necessary for the effective use of this simple but terrible arm, and, like that required for the boomerang or lasso, practice begins with childhood.