In School and Out or, The Conquest of Richard Grant. 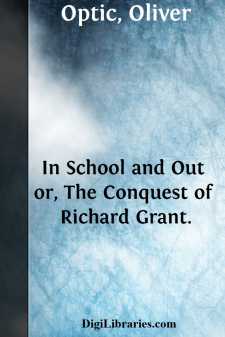 RICHARD GRANT AND FRIEND GET INTO AN AWFUL SCRAPE.

"Now, steady as she is," said Sandy Brimblecom, who lay upon the half-deck of the Greyhound, endeavoring to peer through the darkness of a cloudy night, which had settled deep and dense upon the Hudson, and obscured every object on the shore. "Steady as she is, Dick, and we shall go in all right."

"Ay, ay; steady it is," replied Richard Grant, who was at the helm.

"Port a little! Port a little!" added Sandy, a few moments after, as he discovered the entrance of a little inlet, which was the destination of the Greyhound.

"Shut up your head, Sandy!" replied Richard, in a low but energetic tone. "You might as well publish our plan in the newspaper as speak as loud as that."

"What's the use of hallooing port?" answered Richard, impatiently. "Don't you see the mainsail shakes now?"

"You will be on the rocks in half a minute more."

"Let her go about, then, and we will get a little farther to windward before we try to run in."

The Greyhound came over on the other tack, and stood away from the shore a considerable distance. The wind was very light, and the current was against them; so the progress of the boat was necessarily very slow.

"Now, Sandy Brimblecom," said Richard, when the boat had made a third of the distance to the opposite shore, "we might as well go back to Woodville, and go to bed, as to attempt to carry this thing through, if you are going to bellow and yell like a mad bull."

"Didn't think so!" sneered Richard. "Any one might have heard you clear across the river."

"You spoke too loud, at any rate, and you might as well go up and tell 'Old Batterbones' what we are about as talk half so loud as you did."

"Come, Dick, you have said enough," replied Sandy, who did not relish all the reflections that were cast upon his conduct.

"You are as stupid as an owl; I thought you had some common sense."

"That'll do, Dick; I don't want any more of that kind of blarney; and if you don't shut up, you or I will get a black eye."

Richard did not seem to have much doubt which of them would obtain this ornamental tinting of the physiognomy, for he immediately changed his tone, and did not venture to apply any more unpleasant epithets to his companion. Sandy had obtained some reputation as a fighting character, and was virtually the champion of the ring among the boys in the vicinity of Whitestone.

"Now be more careful, this time, Sandy," said Richard, as he put the boat about upon the other tack.

"Don't give me any more lip, Dick, and I will do any thing you want," replied Sandy, mollified by the altered tones of his friend.

"Don't get mad; we have no time to quarrel, if we mean to put this thing through to-night."

"I am ready to put it through, but I have no notion of being treated like a slave or a fool," said Sandy, as he lay down upon the half-deck, and began to gaze into the gloom ahead of the boat....