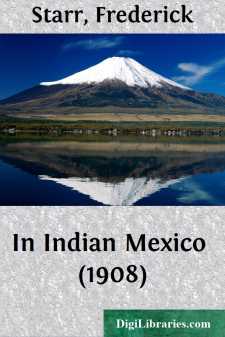 While we stood in the Puebla station, waiting for the train to be made ready, we noticed a priest, who was buying his ticket at the office. On boarding the train, we saw nothing of him, as he had entered another car. Soon after we started, Herman made his usual trip of inspection through the train, and on his return told me that a learned priest was in the second-class coach, and that I ought to know him. As I paid no great attention to his suggestion, he soon deserted me for his priestly friend, but presently returned and renewed his advice. He told me this priest was no common man; that he was an ardent archaeologist; that he not only collected relics, but made full notes and diagrams of all his investigations; that he cared for live Indians also, and had made a great collection of dress, weapons, and tools, among Guatemalan tribes. When I even yet showed no intention of hurrying in to visit his new acquaintance, the boy said: "You must come in to see him, for I promised him you would, and you ought not to prove me to be a liar."

This appeal proved effectual and I soon called upon the priestly archaeologist in the other car. He was an interesting man. By birth a German, he spoke excellent English; born of Protestant parents and reared in their faith, in early manhood be became a Catholic; renounced by his parents and left without support, he was befriended by Jesuits and determined to become a priest. Entering the ministry at twenty-nine years of age, he was sent as mission priest to foreign lands. He had lived in California, Utah, and Nevada; he had labored in Ecuador, Panama, and Guatemala. His interest in archaeology, kindled in the Southwest, continued in his later fields of labor. Waxing confidential he said: "I am a priest first, because I must live, but it does not interfere much with my archaeology." For years past the padre has lived in Guatemala, where he had charge of one of the largest parishes in that Republic, with some eighteen thousand full-blood indians in his charge. Like most Germans a linguist, the padre spoke German, French, Spanish, English, and Quiche, the most important indian speech of Guatemala. In his parish, he so arranged his work as to leave most of his time free for investigation. Twice a week he had baptisms, on Thursday and Sunday; these duties on Thursday took but a couple of hours, leaving the rest of the day free; Sundays, of course, were lost, but not completely, for the indians often then told him of new localities, where diggings might be undertaken. Always when digging into ancient mounds and graves, he had his horse near by ready for mounting, and his oil and other necessaries at hand, in case he should be summoned to the bedside of the dying. As the indians always knew where to look for him, no time was lost.

Not only was the padre an archaeologist: he also gathered plants, birds, and insects. When he was leaving Germany, his nephew, the ten-year-old child of his sister, wished to accompany him. The parents refused their permission, but the uncle gave the boy some money, and they met each other in Frankfort and started on their journey. They have been together ever since. The padre depends completely on the younger man, whom he has fashioned to his mind. The plants, birdskins, and insects have supplied a steady income. The plants cost labor; insects were easier to get. All the indian boys in the parish were supplied with poison-bottles and set to work; a stock of prints of saints, beads, medals, and crucifixes was doled out to the little collectors, according to the value of their trophies. To allay the suspicions of his parishioners, the padre announced that he used the insects in making medicines. One Sunday a pious old indian woman brought to church a great beetle, which she had caught in her corn field four days before; during that time it had been tied by a string to her bed's leg; she received a medal. One day a man brought a bag containing some five hundred living insects; on opening it, they all escaped into the house, causing a lively time for their recapture.

The nephew, Ernst, had made a collection of eleven hundred skins of Guatemalan birds. The padre and he have supplied specimens to many of the great museums of the world, but the choicest things have never been permitted to leave their hands.

The padre is a great success at getting into trouble....